Angela Rye, Naysayers Slander of Farrakhan Shall Not Stand 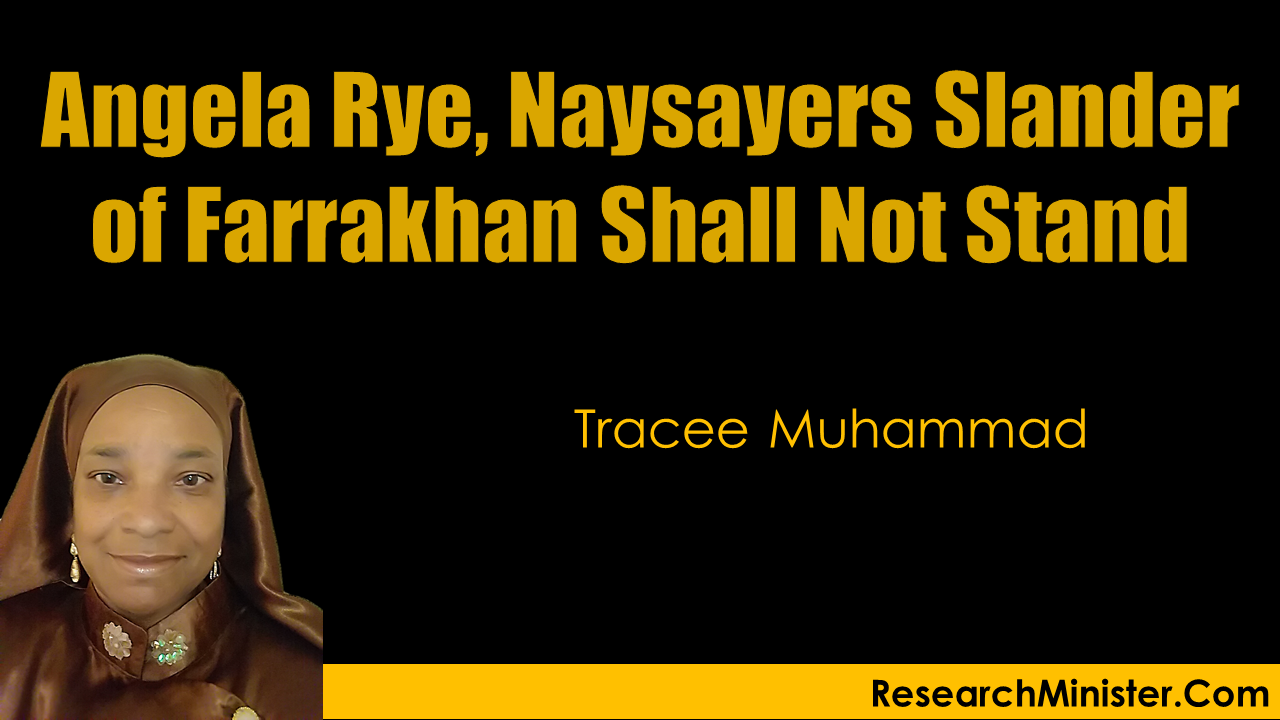 As everyone around the world with access to social media has learned, The Honorable Minister Louis Farrakhan has been banned from Facebook and Instagram.  What does that mean for the Believers, followers, supporters, friends and allies of Minister Farrakhan? Nothing really; we have access to hundreds of lectures still available on YouTube, and webcasts on NOI.org. Not to mention the thousands of people sharing the teachings, quotes and images of Minister Farrakhan among themselves on their Facebook pages with the #WeAreFarrakhan hash tag.

Moreover, what does this mean for the naysayers and enemies of Minister Farrakhan and the Nation of Islam? This is their golden opportunity to slander and libel the Minister and the Nation. We would expect this coming from the familiar adversaries in the white ruling class and leaders of Jewish organizations. However, this ban is exposing certain critics from the Black community who are eager to show their loyalty to the white power structure.

Lenard McKelvey came to my attention a few years ago as a result of Minister Farrakhan making reference to him. He is a host on the very popular program known as The Breakfast Club, which has interviewed the Honorable Minister Farrakhan as a guest on their show. Lenard, aka Charlemagne tha God appeared to be positive, supportive and receptive to the Minister anytime he was on the show. Well apparently they added a recurring guest named Angela Rye who seemed to be a charming articulate intelligent attorney who worked on Capitol Hill with the Congressional Black Caucus; and now is a political commentator on CNN.

These two collaborated to create a new podcast called Sibling Rivalry.  Their inaugural show was 50:57 minutes in duration.  And the conversation touched several subjects including daily affirmations, the Christian faith, numerology, hair weaves, genealogy, and political commentary. At approximately 26 minutes into the conversation; Charlemagne asked Angela to discuss her views on the recent social media ban on the Honorable Minister Louis Farrakhan.

Ms. Rye began to say various things that were factually inaccurate and terribly offensive to anyone who has respect for Minister Farrakhan and his leadership.  According to Ms. Rye:

“He [Min. Farrakhan] needs to show up consistent. He needs to live out his authentic truth in ways that empower Black people but does not take away from other communities”

She further had the audacity to tell Minister Farrakhan:

“Don’t trick off your legacy and stop the BS. I can’t defend stuff you are saying on these clips”

Charlemagne rebutted several of her statements, stating that Minister Farrakhan doesn’t criticize all Jews; only the ones who oppress Black people. However each time he would correct her, she would argue her point with familiar criticisms of the Minister’s message, none of which ever prove that the Minister has spoken other than the truth.  Angela Rye claimed that the Minister “says homophobic things”. Charlemagne attempted to offer the fact that the holy books:  Bible and Qur’an teach against homosexuality, and that Minister Farrakhan comes from an older generation. Ms. Rye replied:

“Just because you’re older doesn’t mean you can be dumb and a bigot.”

She tried to show a bit of a clip of one of Minister Farrakhan’s addresses; and acted like she was so disturbed by it, it moved her to tears. She followed up by saying:

“If I could have my way I’d ask him to dial back the rhetoric.”

I was in disbelief at the insolent comments of this 39 year old “girl.” She would like people to believe she is a scholar just because she has college degrees. Many of us do, but that does not begin to qualify us to compare or compete with Minister Farrakhan’s knowledge, wisdom and guidance. He was taught by The Honorable Elijah Muhammad, who was taught by God: in the person of Master Fard Muhammad. Minister Farrakhan is divinely directed and endorsed by these two; he is backed by divine power.

To be crystal clear and for the benefit of Ms. Rye and those whom share her views, Minister Farrakhan doesn’t need you to defend or justify anything he says or does. He is also backed by the most brilliant legal defense team in this country. The Nation of Islam has many scholars; we are taught to be studious.  Our primary objective is truth and the presentation of actual facts and evidence. No one, even up to this present day and time, has been able to disprove Minister Farrakhan’s message; nor has anyone been able to disprove the root out of which that message springs which is the life-giving teachings of the Most Honorable Elijah Muhammad. He has challenged his critics to listen to his message and identify where he is false in his assertions. Minister Farrakhan has said that he would give his life for the truth that he speaks.  And even at 86 years of age, he remains ever vigilant and strong as the bold champion of his people!

Ms. Rye’s, in her condemnation of Minister Farrakhan, is working for the oppressor! I noticed how she was willing to defend and give the benefit of the doubt to leading Democratic Presidential candidate Joe Biden, despite his support of the racist 1994 Crime Bill.

Minister Farrakhan-whom she would not defend- has no history of helping to send young Black men and women to prison.  In fact the Minister’s message instructs young men and women who to steer clear of the traps that have been set to warehouse the youth into prison settings.  The Minister and his representatives also visit prisons to teach and provide moral and spiritual reform to incarcerated men and women.

What Ms. Rye asked the Minister to do, she should be asking our oppressors to do.  Why doesn’t she plea to all the law enforcement officers who shoot and kill Black men,women,and children without provocation or justification? How about making a plea to all the random white people who call 911 on Black people for no other offense than being black?  Instead Ms. Rye chooses to make a public plea for the only Black leader who has been standing up, representing our people for 64 years consistently to stop hurting the feelings of our enemies!

I concur with Sister Vicki Dillard and others who have rebutted Ms. Rye’s false assertions regarding Minister Farrakhan.  Her comments have inspired powerful responses that have deconstructed her arguments and mocked the ignorance that spawned them.

I was disappointed with Charlemagne, who stopped defending Minister Farrakhan towards the end of the podcast, and started agreeing with Ms. Rye.

I repudiate you both for your statements regarding Minister Farrakhan; you owe the Minister and Black America an apology!

If you tried to use this topic to generate interest for your new podcast, you achieved your objective.  But the steep price you have paid is that you have drawn the rebuke and criticism of millions of us in the larger community of Black people who want nothing to do with you until you make amends!

Sister Tracee Muhammad is an author, community activist and member of the Nation of Islam’s Akron, Ohio mosque.