COME OUT, COME OUT WHEREVER YOU ARE: Memo to Alan Dershowitz Part 4 By Jackie Muhammad 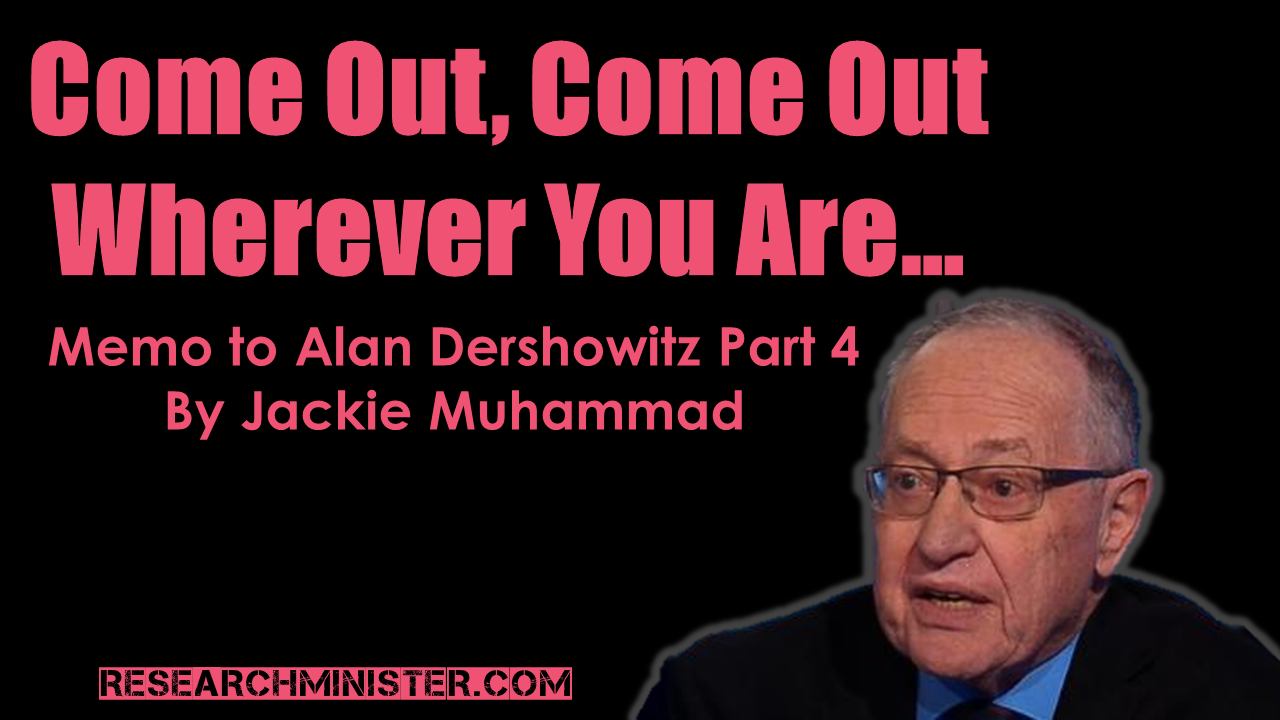 Come out, come out, wherever you are.

Sir. It has been several months now since the Honorable Minister Louis Farrakhan called for a “Showdown” with you and the leadership of the Jewish community who have charged us with being anti-Semitic. This challenge was first issued on the Rock Newman Show on April 27, 2013. He then issued the challenge from Mosque Maryam on November 18, 2018.  However, since that time there continues to be a constant drumbeat of hatred and insults against Black men and women who are exercising their first amendment and religious rights to speak out against evil and wrongdoings. However, the Ashkenazi Jewish establishment continues to scapegoat the Black community with your false charge of anti-Semitism and constantly bombard us with your evil machinations in order to silence our voices. You and the ADL continue these tactics to persuade the Gentiles and the ill-informed Jewish laity that we are other than the followers of a righteous man.

These tactics are not unusual for an organization that many believe was created in sin and iniquity.

According to an article written by Ryan Dawson called “ADL, Terrorist and Mafia Connected and Defending a Pedophile Rapist and Murderer from its Inception”, the ADL was created with Jewish mafia money.

In two daring publications called the Ugly Truth About the ADL, and “Dope, Inc.” written by the Editors of the Executive Intelligence Review, the writers claim that “The Anti-defamation League was established for the purpose of defending not members of the Jewish faith, but the mob. Protecting the names of the criminals who controlled organized crime in America was the ADL’s preoccupation from the very beginning.” (Dope, Inc. p.577). In The Ugly Truth About the ADL the nation’s leading gangsters (Meyer Lansky, Lansky’s successor, Moe Dalitz, and a host of other members of the National Crime Syndicate poured money into the ADL. (p. 23-24) In fact, according to the authors of The Ugly Truth About the ADL, “Without the ADL’S undaunted ‘public relations’ work on behalf of organized crime, the United states would have never been flooded with illegal drugs, and gangsters like Dalitz and Lansky would have long ago been carted off to the penitentiary”.

The impetus to create the ADL was twofold. According to the Secret Relationship Between Blacks and Jews written by the NOI Research Department and a variety of other publications, the Jewish community was seeking to divert attention from the conviction of Leo Frank, head of the Atlanta affiliate of B’nai B’rith, for the rape and murder of a 13-year old White girl named Mary Phagan.  Frank and his legal team placed the blame on a Black man, James Conley, the janitor in Leo Frank’s factory. Secondly, the Jewish community wanted to divert attention from the leading role the Jewish mafia played in the creation of organized crime in America. Prominent Jewish gangsters such as Arnold Rothstein, Moe Dalitz, and Meyer Lansky were at the helm of the creation of organized crime in America and the social and economic mayhem that pursued.

The plan was to use the power of the Jewish community to punish anyone accusing them of involvement in any nefarious criminal activities like rape, murder, alcohol and drug trafficking, as being anti-Semites. Such labeling, then as now, prevents many from telling the truth about the role your community played in undermining true American principles of fairness and justice. Hence, their fear of a Jewish beatdown has kept many in the Gentile community in check as it relates to speaking truth to power.

Meyer Lansky’s legacy lived on through his granddaughter and the key role she played at the ADL. His granddaughter, Mira Lansky Boland, was a member of the ADL’s Board of Director’s, and the person in charge of the organization’s “fact finding” division. Fact finding at the ADL is a term used as a euphemism for spying.

Under Mira Lansky’s leadership the ADL emerged as the nation’s leading domestic spy operation, and in conjunction with the FBI jointly undermined the work of the Nation of Islam. Not only did they spy “on at least 950 political organizations”, well known politicians like Congressman Ron Dellums, and Civil Rights organizations such as the NAACP, SNCC, and CORE, including SCLC and Dr. Martin Luther King, Jr. Special attention, however, was paid to the Nation of Islam.

The ADL produced a scurrilous dossier on the Nation of Islam, distributed it to Members of Congress and others, and forced the government to pull back contracts given to the Muslims to rid the Black community of the ravages of the poisonous drug epidemic plaguing the country. The miraculous work performed by the Fruit of Islam (FOI), the male members of the Nation of Islam, dramatically improved the quality of life of the people living in drug infested public housing projects. The success the NOI experienced in helping to eradicate the ill effects of drugs in the inner cities of America, confronting violent drug dealers, saving the lives of countless public housing residents, and creating safe environments in which children could play and grow, garnered worldwide attention. That is, until the ADL stepped in and coordinated a public relations smear campaign that halted our efforts.

The Honorable Minister Louis Farrakhan has called out the ADL, you Mr. Dershowitz, and the leadership of the Zionist Ashkenazi community to answer for your long history of racism, islamophobia, and the lies you all have propagated against the Minister and the Black Community. Although Black people have historically been among the biggest supporters of the Jewish diaspora, we are still constantly demonized by you. Go back and study how the Africans under the leadership of the Nubian Prince, and later Pharaoh Taharqa (The Rescue of Jerusalem, 2 Kings 19:9) saved the Jews from being annihilated by the Assyrians in 701 BC. In addition, study how the Sephardic Jews were empowered by Tarik and the Black Muslim Moors in Spain in 711 AD, and breathed life in a moribund Jewish community during the Middle Ages; then study Jews and Judaism in African History by Richard Hull and see how the Jews enriched themselves culturally and economically serving as middle men in Egypt and North Africa during occupation of the Greeks and the Romans. For good measure, read the series of The Secret Relationship Between Blacks and Jews, Vol. 1-3, to see how you gained global financial superiority by enslaving Black people for over 400 years.

And how do you repay us for these long years of suffering and toil? You designate the Black community as the nation’s leading anti-Semites. That takes a lot of gall. Along with the Zionist cabal that continues to denigrate The Honorable Minister Louis Farrakhan as an anti-Semite, you have now added Toni Morrison, Alice Walker, Women’s Rights activist, Tamika Mallory, former CNN commentator Mark Lamont Hill to the cavalcade of notable outspoken Blacks who dare to criticize Israel as a racist settler state. Not to mention the tentacles you have strangling the members of the Congressional Black Caucus, Black entertainers, athletes and religious leaders who oppose Jewish racism and oppressive Zionist practices and policies.

For these and a host of other reasons the Honorable Minister Louis Farrakhan is calling you out for a public showdown. But not just you, sir.  He wants the entire Jewish leadership who unjustifiable label us as anti-Semites, for this public showdown.  But instead of heeding his call, you go into hiding. You have never met a television camera you don’t like when it comes to condemning the Minister.  It’s like throwing a brick at a window and then go and hide behind a tree. Stand up and face us and stop running into a rabbit hole and pretending as if you are so innocent.

The same tricks and lies that the mafia used to establish the ADL, the same support for slavery that B’nai B’rith used during the Civil War era, and the same tactics used by the ADL to support the FBI’s Cointelpro initiative to destroy and kill Black leaders they feared would emerge as the Black Messiah, are the same tactics being employed now to disempower the Black community and those who follow the leadership of the Honorable Minister Louis Farrakhan. There used to be a game we played as children called “Hide and Go Seek”. We would cover our eyes, count to ten, then go out and search for those who thought they had found a safe hiding place. Then we would sing, “Come out, come out, wherever you are!  We invite you to come out from your hiding places and meet us in the public square, sit down and debate with us or stop playing your silly games.