MYTHBUSTING:“Why Did Malcolm X Leave the Nation of Islam?; Why Did He Die?”

For many years the Black community has had a huge open wound.  That open wound is the assassination of our leaders.  Our strong leaders frequently find themselves the target of the most powerful enemies in existence.  Specifically, the Unites States Government, Jewish groups & the white ruling class in America; they never allow radical and revolutionary Black leaders to go unbothered.

Nat Turner was killed, Denmark Vesey was killed, Marcus Garvey was deported and his movement destroyed, Martin Luther King Jr. was killed; attempts were made on the life of the Hon. Elijah Muhammad and Malcolm X was assassinated.

In an effort to bother and interfere with the rebuilding of the Nation of Islam being done by the Hon. Min. Louis Farrakhan, these same powerful enemies re-introduced, into the mainstream of the American consciousness, the legendary Muslim Minister Malcolm X.  These forces did not love, respect or help Malcolm X during his life time.  But they sought to use him, posthumously, to interfere with the Honorable Minister Louis Farrakhan’s rebuilding of the Nation of Islam.  As Prof. Michael Eric Dyson put it: 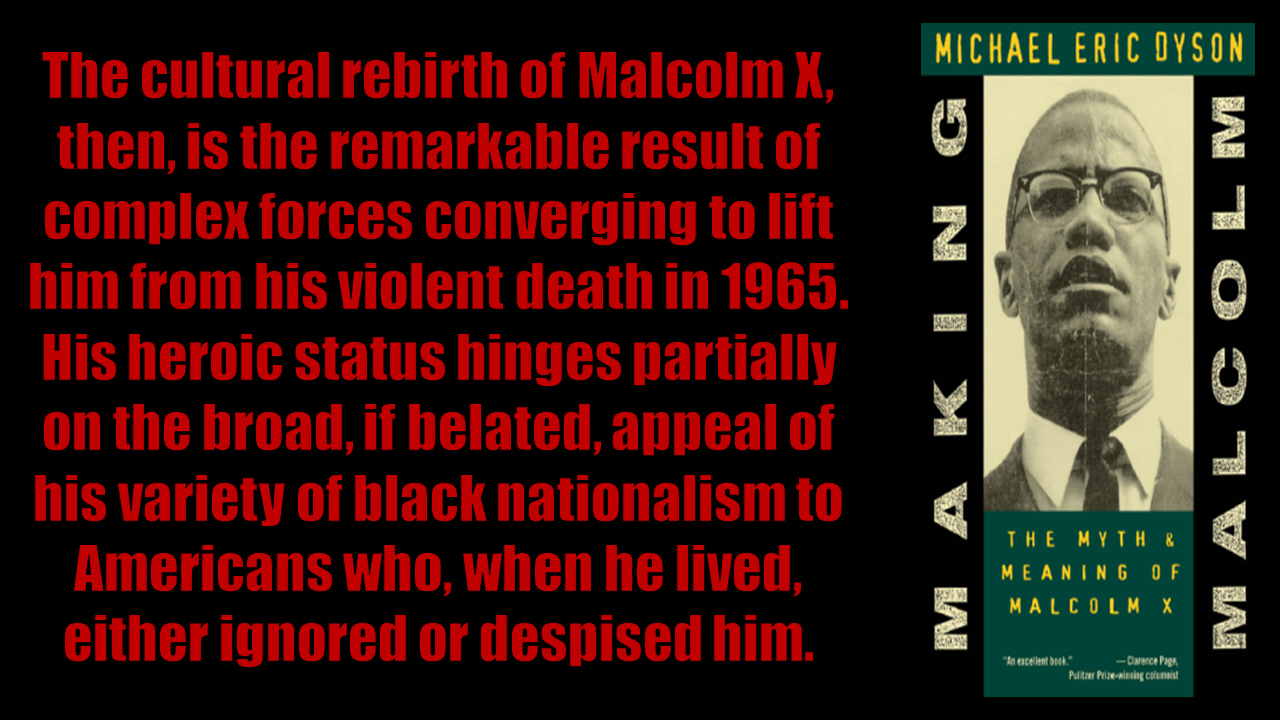 “The cultural rebirth of Malcolm X, then, is the remarkable result of complex forces converging to lift him from his violent death in 1965. His heroic status hinges partially on the broad, if belated, appeal of his variety of black nationalism to Americans who, when he lived, either ignored or despised him.”

I saw something floating around social media earlier today that was someone saying that Malcolm X died because he was killed for exposing a predator and that he died to protect abused Black girls.

I read it and it reminded me of how great a tool social media is for sharing opinions and perspectives on all manner of things.  But most of the time what we see shared are opinions and personal feelings that lack a basis in fact or truth.  So, since I am completing a book on the assassination of Malcolm X that will be out soon, I thought I would share some of the facts to shed light on the subject and impeach the false commentary that I read earlier.

I truly respect everyone’s right to their own opinion.  But we have to be on guard when opinion is used as a substitute for facts.  Popular culture, when really examined, appears nowadays as a weaponized tool used to deliberately dumb down the American people.  And many people are quite susceptible to providing buy-in when opinions are used as substitutes for facts.

Anyway, lets look at the Malcolm X’s stated reasons for leaving the Nation of Islam.  They are important. On March 14, 1964 in an interview with the New York Amsterdam News he told reporter James Booker the following:

“I have reached the conclusion that I can best spread Mr. Muhammad’s message by staying out of the Nation of Islam, and continuing to work on my own among America’s 22 million non-Muslim Negroes…But, I will always remain a Muslim, and will always teach what Mr. Muhammad has taught me, as I best understand it,” Malcolm declared…“I am still a follower of Mr. Muhammad and will remain a believer in the faith of Islam,”

In this, Malcolm’s “declaration of independence” he blames other NOI members for misrepresenting his true intentions to the Hon. Elijah Muhammad and working to sour the relationship he had with his teacher.  And he maintained that he still considered himself a follower of the Hon. Elijah Muhammad and was in fact leaving so that he might enjoy a wider latitude of freedom to promote the teachings of the Nation  of Islam without necessarily being inside the structure of the Nation of Islam.  What I am saying if further corroborated by the Newsweek clip below:

“Malcolm was leaving behind little more than his place in the Muslim mainstream.  He plans to call his new operation the Muslim Mosque Inc.; he still pledges spiritual allegiance to national Muslim overlord Elijah Muhammad, even if Muhammad did bring on the split by suspending Malcolm for calling President Kennedy’s assassination a case of “the chickens coming home to roost.” For that, Malcolm blames not Muhammad himself but other national leaders who have the boss’s ear and who used the quote as an excuse to ‘force me out.”  “If you put the wrong information into a computer.” Malcolm told Newsweek’s Peter Goldman, “it can only come back the way you put it in.”

Thus his departure was not a total break with the movement he joined in 1948 while doing time in prison as  a convicted thief.  His new mosque will still teach the Muhammad message: separation, moral self-improvement, economic self-sufficiency-and, ultimately, an exodus “back…to our own African homeland.”

So it is clear that at the time of Malcolm’s leaving of the Nation of Islam, he considered himself still a follower of his beloved teacher the Most Honorable Elijah Muhammad.

The one other aspect that I will briefly address here and which we more fully address in the book is on the domestic life of the Most Honorable Elijah Muhammad.

The social media post that I read earlier, no doubt is fed from the allegations regarding the domestic life of the Hon. Elijah Muhammad.  At a certain point after Malcolm left the NOI, he lashed out at his teacher for adhering to a spiritual decree that prophets and Messengers of God adhere to which is form of limited polygamy.  The Judeo-Christian and Islamic prophets all practiced a form of polygamy.  And the Most Honorable Elijah Muhammad, whom he and we his followers believe to be a member of the community of prophets and messengers of God, did the same.  Malcolm X knew this and discussed this with Louis Lomax.  Louis Lomax wrote this in his book To Kill A Blackman.

What made Malcolm decide to publicly frame Messenger Muhammad’s domestic life in a slanderous kind of way was the manipulation of the FBI through the agents and provocatuers that they had developed during their COINTELPRO (counter-intelligence program) aimed at neutralizing the Messiah among Black people. After Malcolm was separated from his teacher, the FBI began to antagonize Malcolm seeking to make Malcolm believe that his teacher wanted to kill him.  But as we discuss fully in the book  Malcolm came to realize that he was being manipulated and planned to retract his prior statements that claimed the Nation of Islam was attempting to take his life-he planned to retract those statements the day he was killed.  J. Edgar Hoover saw both Malcolm X and the Hon. Elijah Muhammad as candidates for the role and function of the Messiah among Black people; and he had determined to “prevent their rise” which is code language and internal jargon used to describe murder.

We have the memos that show how the FBI considered Malcolm’s assassination as a success and victory for their COINTELPRO operations.  They took credit for killing Malcolm X.  We discuss this further in the book. 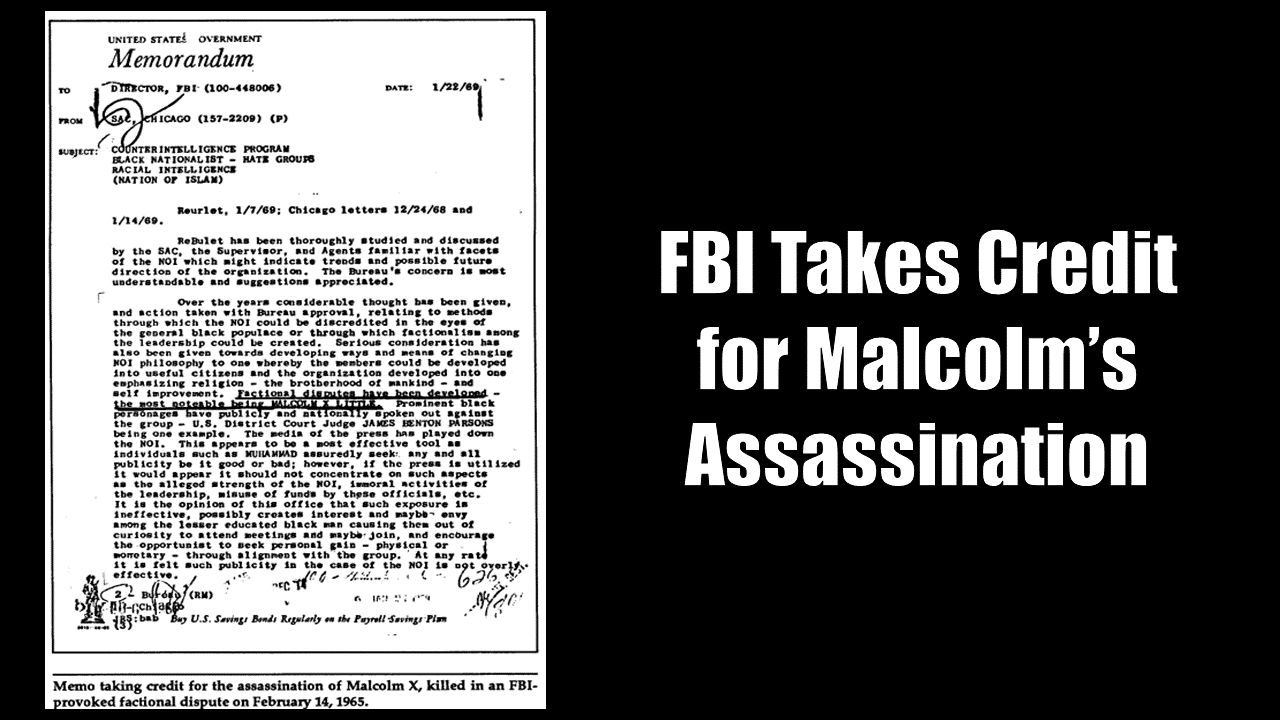 The proof that Malcolm X did not leave the NOI because he was exposing a predator and died for abused Black girls lies in the fact that Malcolm X remained a Muslim.  He even had a Muslim funeral; his body was washed and wrapped in Muslim burial garments and Muslim prayers were said at his funeral.  He gave his children Muslim names.  Why is this important?  It is important because as a Muslim, he is a believer in Prophet Muhammad, and a follower of his Sunnah or way.  So lets just say for the sake of argument, that he loathed and hated Elijah Muhammad because of his domestic life.  Lets say that he believed Elijah Muhammad was a predator of teenage girls.  If this is the case, then how much more so would he haved hated Prophet Muhammad, a prophet that many of his critics allege married a pre-teen named Aisha.

Are we then to believe that Malcolm defected from following a “dirty ol’man” so that he could follow  a “dirtier ol’man?”  This is illogical. This makes no sense when measured up against the facts. Malcolm X was killed because J. Edgar Hoover wanted to get rid of the Nation of Islam.  He concluded that since Malcolm X and Elijah Muhammad were candidates, in his mind, for the Messiah who could unite and electrify the masses of Black people to revolt against white supremacy, he had to kill “2 birds with one stone.”  So, he killed Malcolm using agents and informants that he developed through COINTELPRO.  And he used “bureau friendly journalists” to blame Malcolm’s death on the Nation of Islam so that the growth of the Nation of Islam and the popularity of Elijah Muhammad would die.

Anyway, that is enough for now.  Stay tuned for the new book called “Didn’t Yall Kill Malcolm?: The Plot to Kill Malcolm X and the Plot to Destroy the Nation of Islam.”