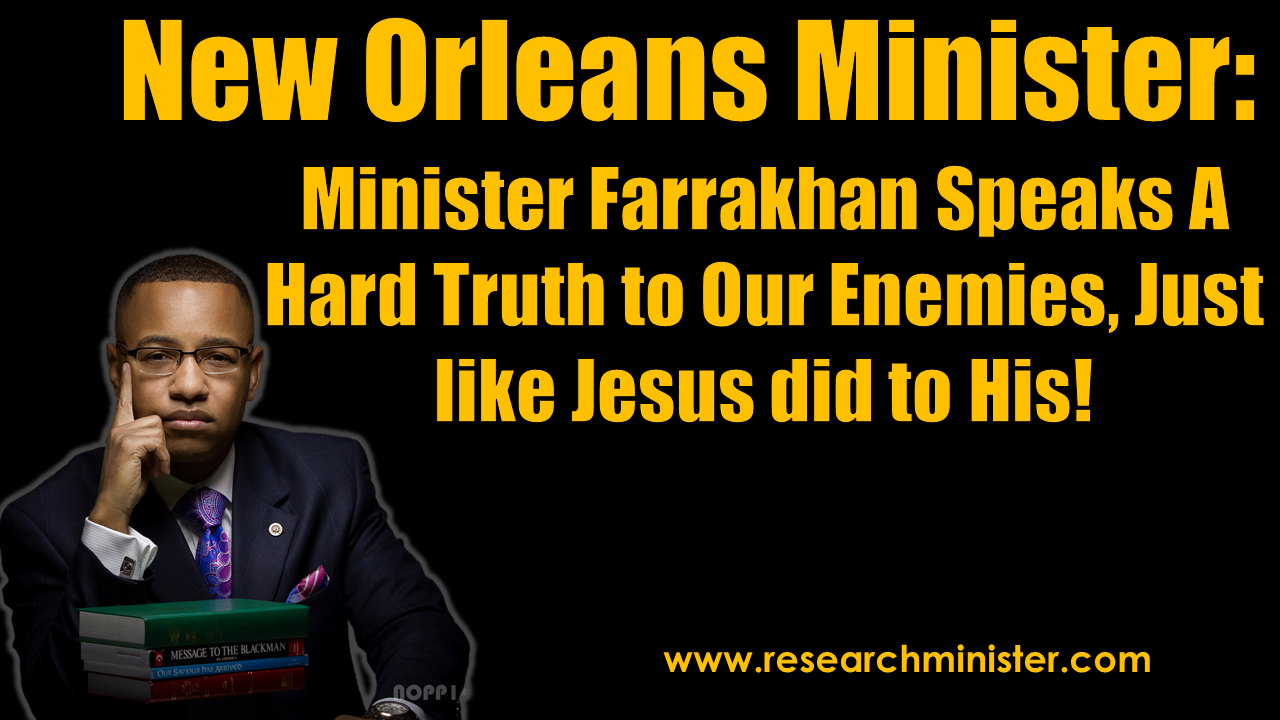 Minister Farrakhan’s New Orleans, Louisiana representative is Student Minister Willie Muhammad.  The architect of a national Conflict Resolution initiative, Minister Willie weighs in to the controversy and conflict that exists between the Hon. Min. Louis Farrakhan and the age old adversaries of the Black community.  His analysis introduces a much needed scriptural perspective into the dilemma that is often framed in political terms. Read, Reflect, Share & Act.

“You got a hell of a nerve! If, if my rhetoric is too strident? Who better to correct me than my brothers and my sisters? If I need to be brought in line or refined? Who better to do it than the members of my own family? We don’t get into your family business. You stay out of ours!”

The above words are from some words shared by the Honorable Minister Louis Farrakhan at the NACCP Unity Summit in 1997! The full excerpt can be viewed on YouTube. These words by the Honorable Minister Louis Farrakhan’s are powerful and prophetically fulfilling! I think many of you clearly understand what I mean when I say powerful, however, some or many of you who read this may not grasp what I mean when I say his words are prophetically fulfilling. In my effort to keep this article short I would just briefly explain it this way, his words fulfill what the New Testament scriptures say about the impact of the words spoken by Jesus.

In the above quote I would like us to pay close attention to the Honorable Minister Louis Farrakhan’s use of two words. The first is rhetoric and the second is strident.

rhetoric ~ (1) the art of effective or persuasive speaking or writing, especially the use of figures of speech and other compositional techniques. (2) language designed to have a persuasive or impressive effect on its audience, but often regarded as lacking in sincerity or meaningful content.

strident ~ (1) loud and harsh (2) presenting a point of view, especially a controversial one, in an excessively and unpleasantly forceful way.

Let’s look at the word rhetoric. Nearly every article written by those who desire to paint the Honorable Minister Louis Farrakhan as anti-Semitic, misogynistic and any of the other dozen of false labels, use the word rhetoric to describe the truth he speaks. Before the examples I feel it’s important to make mention that the only ones who see the Honorable Minister Louis Farrakhan’s “rhetoric” as “lacking in sincerity or meaningful content” are those who are the targets of truth he speaks.  Here are some examples of what our enemies and modern Scribes write.

“After his diagnosis, Farrakhan toned down on the racial rhetoric…”

“Louis Farrakhan, leader of the Nation of Islam, has long expressed anti-Semitic and anti-white rhetoric…”

“Farrakhan is known for his fiery speeches, which often include talking points on self- improvement for black people, along with anti-Semitic rhetoric…”

As I reflected on their use of this word (rhetoric) to describe the words the Honorable Minister Louis Farrakhan speaks that frees the minds of those victimized by white supremacy, I realized how the enemies slander of the Minister even bears witness to his Biblical identity. One of the reoccurring themes in the definition of rhetoric is persuasiveness. The enemies of Jesus were always afraid of how Jesus’s words would persuade the people who were being oppressed by the Roman government and mislead by the religious class of that time.

“When the leading priests and teachers of religious law heard what Jesus had done, they began planning how to kill him. But they were afraid of him because the people were so amazed at his teaching.” ~ Mark 11:18

“From then on he taught each day in the Temple. The high priests, religion scholars, and the leaders of the people were trying their best to find a way to get rid of him. But with the people hanging on every word he spoke, they couldn’t come up with anything.” Luke 19:47-48 Message Translation

23 Then he got into the boat and his disciples followed him. 24 Suddenly a furious storm came up on the lake, so that the waves swept over the boat. But Jesus was sleeping. 25 The disciples went and woke him, saying, “Lord, save us! We’re going to drown!” 26 He replied, “You of little faith, why are you so afraid?” Then he got up and rebuked the winds and the waves, and it was completely calm. 27 The men were amazed and asked, “What kind of man is this? Even the winds and the waves obey him!” ~ Matthew 8

A basic study about Jesus and his issue with leadership will reveal his words (rhetoric) sparked controversy.  As mentioned the same is true for the Honorable Minister Louis Farrakhan, but we should not fret because it shows the Minister is right and exact. Listen to what this scholar writes about the rhetoric of Jesus.

“When Jesus spoke to the religiously proud, it seems he held nothing back with regards to rhetoric. His rhetoric was extreme, even insulting. Note above the quote from Matthew 23:33

“You snakes! You brood of vipers! How will you escape being condemned to hell?” And likewise with secular authorities, At that time some Pharisees came to Jesus and said to him, “Leave this place and go somewhere else. Herod wants to kill you.”  He replied, “Go tell that fox, ‘I will drive out demons and heal people today and tomorrow, and on the third day I will reach my goal.’” Luke 13:31-32” Source: http://www.bcbsr.com/topics/fj10.html

Sounds like the Honorable Minister Louis Farrakhan to me! Another glaring similarity exists in the area in how the enemies of Jesus and Minister Farrakhan responded to the rhetoric. Listen to what this write stated about their response.

“In reaction to criticism, the proud may not have much to say about the actual content of the criticism, if it be true. And so to deflect the issue they may often allude to the tone of the critical rhetoric being used.” Source: http://www.bcbsr.com/topics/fj10.html

So those cut by the symbolic double edge sword of truth that comes out of mouth the Honorable Minister Louis Farrakhan they use deflection instead of allowing the truth to serve as a mirror in which they can see the error of their wicked ways. Their deflections did nothing to thwart the aim of this man Jesus. He still aims the truth revealed to him at their falsehood and pride.

This writer continues by saying that when Jesus spoke he humiliated the hypocritical leadership of that time.

“How does Jesus deal with proud people? He humiliates them. This was not for their destruction, but for their benefit. As a father chastises his son for his own good, so Jesus humiliates the proud to develop in them the essential character quality of humility, without which they cannot be saved.” Source: http://www.bcbsr.com/topics/fj10.html

Sounds like Jesus used strident language when dealing with the hypocritical leadership of his time! If you were living during what is said to be the time of Jesus would you be amongst the crowd that would be calling for the denunciation of Jesus because he called these hypocritical leaders vipers, devils, whitewashed sepulchers and more! Chances are you wouldn’t because you would know that his description of them was right and exact! You would know his battle with this hypocritical leadership was not out of a spirit of hatred nor racism but was a matter of principle and in line for why he was born!

If you would not denounce Jesus, how in the hell could you even entertain the thought of denouncing a man that is doing the EXACT same thing Jesus is said to have done in his time?

I know the answer to that. Maybe next time we will write something explaining why.

In closing, let’s follow up the reading of this article with the following actions:

#1 ~ Re-share and/or post this article and any other positive article defending the Honorable Minister Louis Farrakhan and the Nation of Islam online.

#2 ~ STOP posting and sharing those articles where the enemy and scared leaders are denouncing or repeating what the enemy is saying about the Minister.  Why spread their evil to your followers? They don’t re-share our defenses.

#4 – Use these hashtags when you post about the Honorable Minister Louis Farrakhan on social media. #HandsoffFarrakhan #Farrakhan #DefendingFarrakhan

#5 – Follow the Honorable Minister Louis Farrakhan on his social media pages if you don’t already. If you do follow him encourage others to follow him. This will allow you and them to have access to his direct words.

#6 – Read the scholarly articles by Brother Demetric Muhammad on his page. Our brother has great resources that can help all of us in our understanding and defense of the Honorable Minister Louis Farrakhan.

#7 – When we hear or see people online attacking and lying on the Honorable Minister Louis Farrakhan simply post one of the links from the playlist we posted above. Doing so will directly combat their lies.