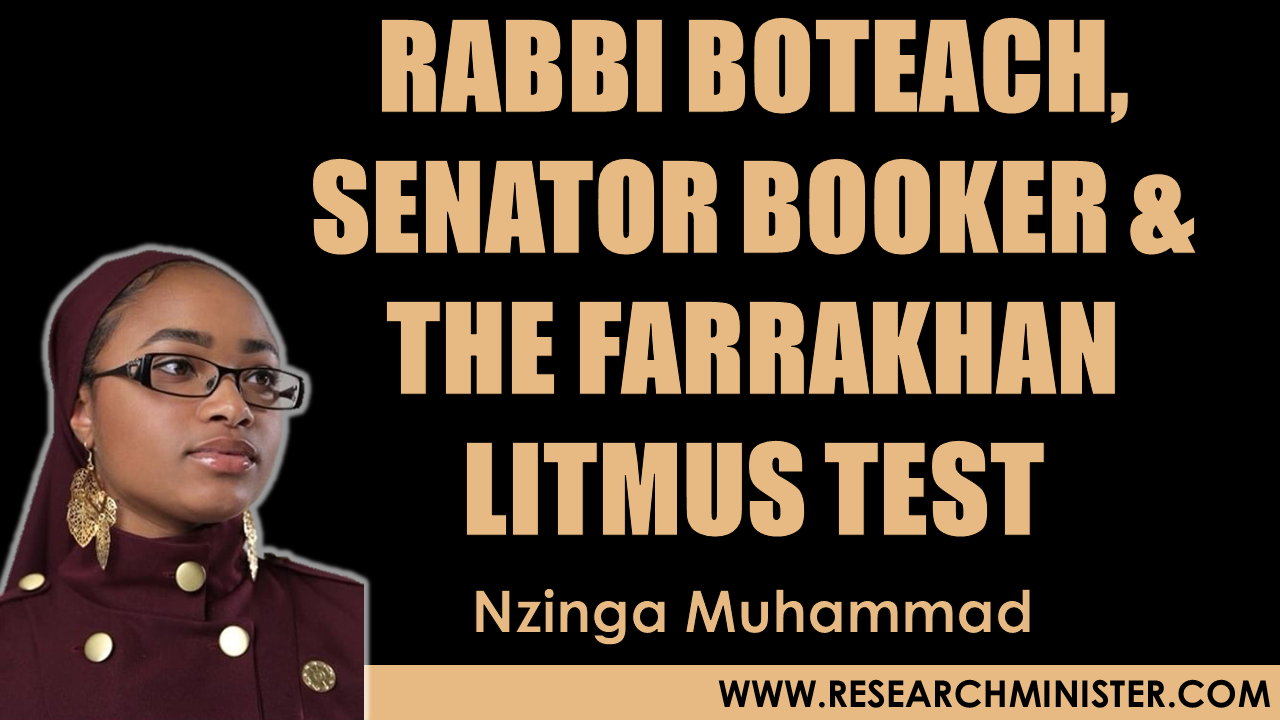 While this is the season of presidential campaigning, it is also the season of handing out the Farrakhan Litmus Test to black politicians.  The Farrakhan Litmus Test is generally placed upon black leaders or influential black people who try to excel in the world.  It is designed to discredit them until they denounce a man who white political leaders see as a threat to their power. We have seen this before in the 2008 Democratic Primary Presidential Debate where Barack Obama was publicly scolded by Hillary Clinton for not “rejecting” the Minister the way she wanted him to.

The Minister is exclusively targeted by those in the white power structure in such a way that his presence in albeit predominantly black spaces is feared and opposed.  Leaders and organizations that have a relationship with him are accused of “supporting anti-semitism.” This kind of white gatekeeping of black leadership is constantly intended to dictate who black people can and cannot talk to, listen to, or be around.

Recently in an article by Rabbi Shmuley Boteach, he voiced his disapproval of candidate Senator Cory Booker for his statements about the Minister and the Nation of Islam in Columbia, South Carolina. Senator Booker was responding to a question that asked if he was familiar with the Minister and whether or not he would meet with him. He answered,

“You know, I have met — I live in Newark, so we have famous Mosque 25, we have Nation of Islam there. As mayor, I met with lots of folks. I’ve heard Minister Farrakhan’s speeches for a lot of my life. So I don’t feel like I need to do that. But I’m not one of these people that says I wouldn’t sit down with anybody to hear what they have to say. But I live in a neighborhood where I’m getting guys on the streets, offering and selling his works. I’m very familiar with Minister Louis Farrakhan and his beliefs in his opinions.”

Like Hilary Clinton in her reaction to Senator Barack Obama, Rabbi Boteach felt that Senator Booker did not have a strong enough condemnation.  He wanted him to strongly and forcefully denounce Minister Farrakhan. In telling Sen. Booker what he “should” have said when asked about our Minister, Rabbi Shmuley Boteach wanted to remind him of their work together and all of the support he has received from the Jewish community. Rabbi Boteach reminded him that he served as president of the L’Chaim Society at the University of Oxford, and was treated well by members of the Jewish community after speaking at many synagogues throughout the United States.  He also mentions that he has “enjoyed wide moral and financial support from the Jewish community” throughout his political career. According to Rabbi Shmuley Boteach, some of what he wanted Sen. Booker to say was,

“I would never insult  my Jewish friends and supporters by meeting with a man who demonizes Jews and incites violence against them, especially a time of rising global anti-Semitism.”

Minister Farrakhan has never demonized or incited violence against any Jewish person. Those who have researched, studied, or closely listened to the Minister would know that he has taught his audiences to respect people of all faiths and backgrounds. By now, we should expect the Nation of Islam to be wherever black people are found. We are no strangers to the community. It is impossible to work among our people and not run into the Nation of Islam at some point. You cannot work for black people without including the Nation in that conversation because we have been doing the groundwork of salvation for our people for almost a century. As fare as the Black community is concerned, it is to be expected that if you are in a position of power, whether public service or within the private sector, you will eventually cross paths with the work and influence of the Nation of Islam.  The work and impact of the Nation of Islam is well respected and universally laudable. Meeting with Minister Farrakhan has been an honor for those who have ever met with him and had a conversation with him.

What is particularly interesting, though, is how Rabbi Shmuley Boteach reminded Senator Booker of what the Jewish community has done for him.  In other words he reminded him that he is indebted to the Jewish community for his the success of his political career.  It is the view of Rabbi Boteach that payment for the debt involves the repudiation and condemnation of  a man that has done so much for our community. Let this remind us of the open letter that Minister Farrakhan penned to black leadership in which he said the following:

“As they call upon you to denounce me as an anti-Semite and, because of the favor you believe you owe them for what they have done to help make life comfortable for you; I am asking you to stand down.”

In this political season, we must be wise to the tired and worn out use of the Farrakhan Litmus Test.  It is a trap. 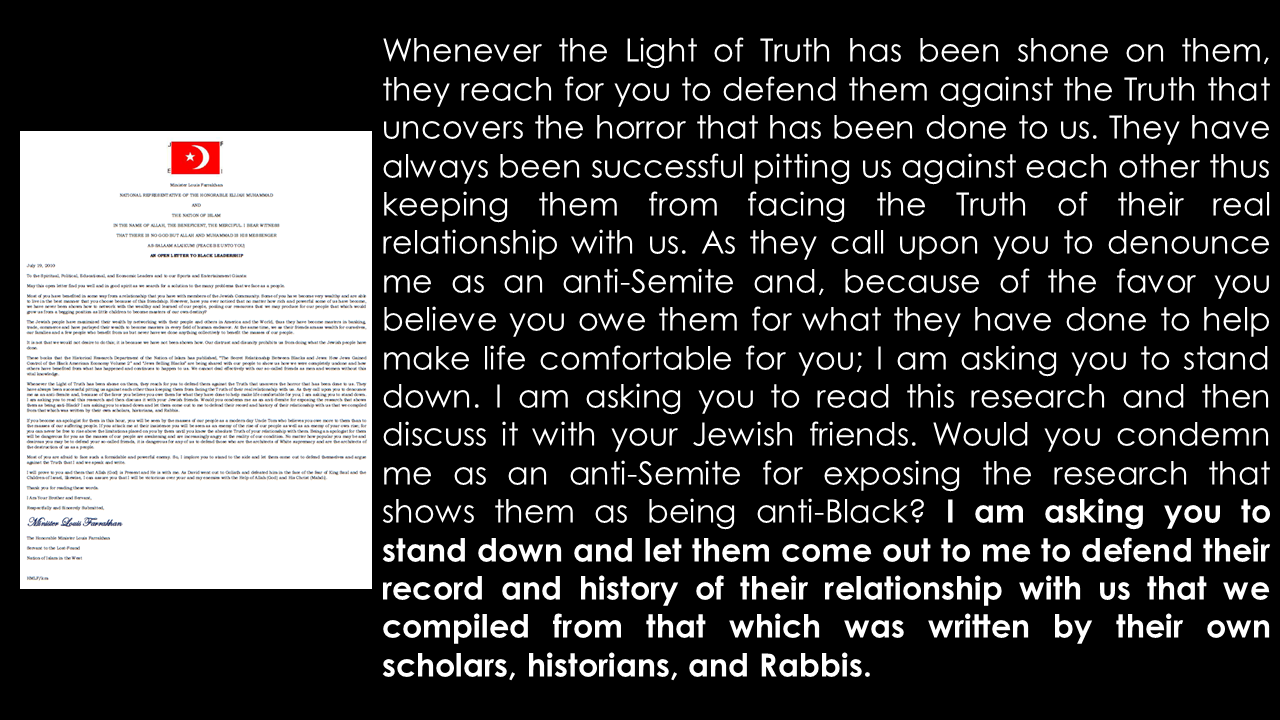 The denunciation of Minister Farrakhan is a method to keep black people at the beckoning call of our oppressors. And any political leader to who does so will become alienated from the poor and grassroots community who view Minister Farrakhan as a champion and hero.

The regulation of our leaders and friends and the control of our elected officials is a hindrance to the political progress of the Black community.  Minister Farrakhan has become the bogeyman for white people.  Influential black leaders and groups are threatened that they should stay away from him. It would be better for these men and women of influence to do as the Minister has asked and stand down. Don’t participate in the Farrakhan Litmus Test. Stay out of it.

During this season of political campaigns , we are sure to see this 1980’s era political trope rear its ugly head frequently. Called the “Farrakhan Litmus Test”, it is ultimately a gauge to measure a political candidates prioritization of Jewish interests over the interests and needs of the Black community.

And yet as it is, the “Farrakhan Litmus Test” does have some modicum of utility for the Black community; it bears one positive aspect for those of us who are Black community stakeholders.  The Farrakhan Litmus Test acts as a filter.  It helps to expose those who are not willing to unapologetically speak truth to power. In this way it provides the Black voter with much needed visibility into the core of the political candidate’s heart.  Because any candidate that ‘plays the game’ and repudiates Minister Farrakhan is a politician who believes that those who give money are more important than those who give votes.  All those who succumb to the pressure and bow in compliance with the demand to denounce Minister Farrakhan are unworthy of the Black community’s support. Thusly, in a way, the Farrakhan Litmus Test lets Black voters know who our true leaders really are.