SANKOFA: The Nation of Islam’s History in The Month of September 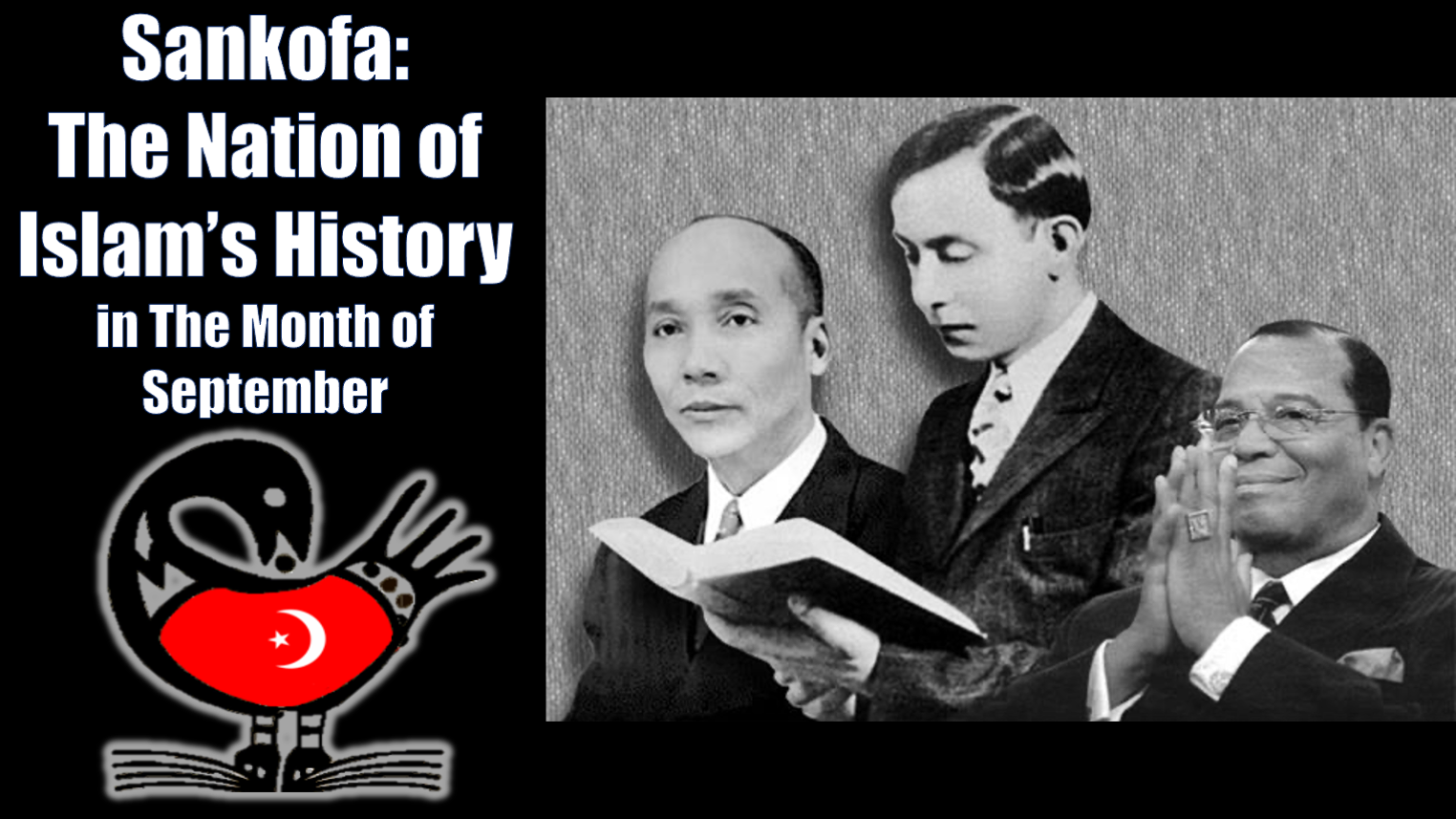 The Most Honorable Elijah Muhammad strongly emphasized the importance and value of history.  From his words below, written to the early Nation of Islam student ministers’ class, we conclude that he believed and believes that  history is more than a mere sideline study, novel pursuit or pointless pastime.  He writes profoundly the following:

“First: History is above all our studies; the most attractive and best qualified to reward our research. As it develops the springs and motives of human actions, and displays the consequence of circumstances which operates most powerfully on the destinies of the human being. Second: It stands true that we the Lost Found NATION, of ISLAM, in the wilderness of North America, have not applied ourselves to the study of History. But rather to folly. Having a lots of the bread of idleness, and when an effort was made to the above affect of History study, it was to our detriment by not knowing what History that was more valuable, to aid us in the knowledge of our own NATION.  THE WISE MAN, is the one who have made a careful study of the PAST events of ANCIENT and MODERN HISTORY. The KNOWLEDGE of the FUTURE is JUDGED by the KNOWLEDGE of the PAST. There are MEN born with a gift of PROPHECY. While some are trained into the KNOWLEDGE by intense studies of the PAST EVENTS OF HISTORY.”

-April 2, 1936 Letter To The Ministry Class written by the Most Honorable Elijah Muhammad

A powerful symbol that might be used to communicate in an artistic way, an aspect of what the Most Honorable Elijah Muhammad is saying in this important excerpt, is the African sankofa bird.  The sankofa bird symbol comes from Ghana and is popular among the Adinkra tribe.  In A.K. Quarco’s book The Language of Adinkra Symbols the Sankofa Bird is defined to mean or signify the following:

“to learn from or build on the past. Pick up the gems of the past. [It is a] constant reminder that the past is not all shameful and that the future may profitably be built on aspects of the past. Indeed, there must be movement with the times but as the forward march proceeds, the gems must be picked up from behind and carried forward on the march.”

When we consider Black History in America, there are many significant and historical movements for justice and liberation.  I would argue that the most significant movement has been and is The Nation of Islam.  No other group has been as targeted for destruction by the United States Government.  No other group has been able to mobilize mass rallies of millions of our people. No other group has produced the steady stream of notable personages such as Louis Farrakhan, Muhammad Ali, Malcolm X, Dr. Naim Akbar, Sonia Sanchez, Etta James, Kool & the Gang, et.al.  And no other group has had the cultural impact on Black America like the Nation of Islam, being responsible for the popularity of the use of the term “Black” to replace the pejorative term “Negro”; and for making the religion of Islam the second most populous religion within Black America.  The Nation’s cultural influence extends to effecting the way Black people name their children-choosing African and Islamic names has become common because of the Muslims.  The widespread appeal of modest dress and natural hairstyles is connected to the women of the Nation of Islam.  And nowadays it is difficult to imagine the popularity of vegetarianism and veganism absent the Nation of Islam’s 90 year history of encouraging the need for change in Black folks eating habits.

The Honorable Minister Louis Farrakhan’s glorious ministry of rebuilding the Nation of Islam began during this month, the month of September in the year 1977.  Since that time his work of challenging the forces of the oppression of Black people has made him the most controversial leader in America and without a doubt, the epitome of Black leadership.  The Minister has also been and is the Godfather of the Hip-Hop world, being the “go-to” leader to provide wisdom and guidance to the many artists who seek his help.

As a member of Minister Farrakhan’s ministry class and his research team, I have frequently noticed that this month of September contains an extraordinary amount of historical calendar dates within the inspirational history of the Nation of Islam.  So much so, that an argument can be made that the month of September ought to be proclaimed as a Holy Month.

In the Islamic calendar, the month of Ramadan is the 9th month and is a Holy Month because it is the month in which the Holy Qur’an was revealed to Prophet Muhammad more than 1400 years ago.  The 9th month of the Christian/Gregorian calendar is September and many important moments in the Nation of Islam have occurred during this month, and as such are  very important dates in the annals of Black History and in the history of Islam’s rise in the Western Hemisphere.

Consider the significant and important dates that deserve our attention and reflection during the month of September: 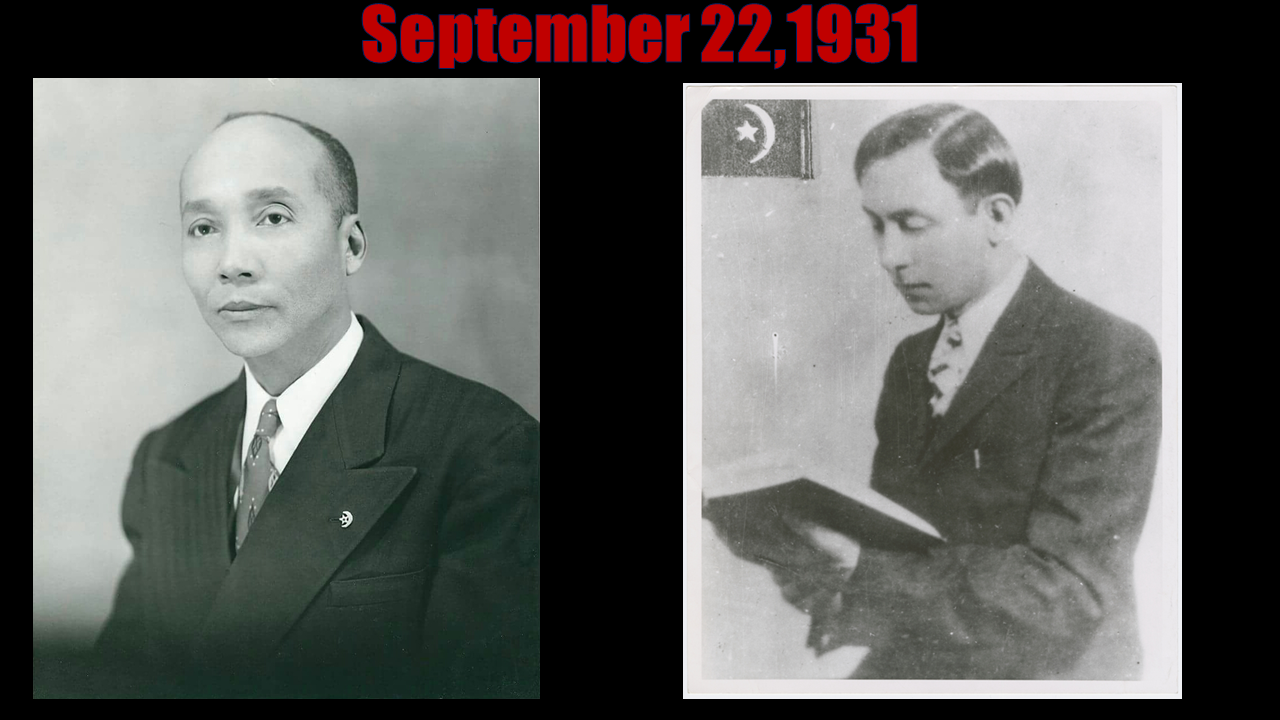 September 1934 –Most Honorable Elijah Muhammad left Detroit to move to Chicago after Michigan Board of Education threatened to force children of the Muhammad University of Islam to go to Detroit Public school system. This move gave birth to one of the largest networks of independent Black schools in the history of Black people in America, the Muhammad University of Islam school system.

“In late September 1942, in a series of highly publicized raids, federal agents in Chicago arrested eighty-five African Americans. Three women and nine men were charged with sedition; the remainder were accused of draft evasion. Indicted on the former charge(sedition) were Elijah Muhammad, Linn Karriem, and Pauline Bahar of the Allah Temple of Islam [ATOI]…”-Prof. Ernest Allen, When Japan Was Champion of The Darker Races: Satokata Takahashi and The Flowering of Black Messianic Nationalism

The imprisonment of the Most Honorable Elijah Muhammad and many of his male followers was the beginning of the establishment of the religion of Islam within the American penal system.  Historians of religious rights of the incarcerated have credited the Black Muslims with pioneering legal battles that secured religious freedoms for all incarcerated persons in America.

September 3, 10, 17 & 24, 1972 – These dates are a part of the monumental lecture series called The Theology of Time delivered by the Most Honorable Elijah Muhammad.

September 15, 1974 –Minister Farrakhan lead Black  Family Day part 2 at New York City on Randall’s Island; 35,000 people attend this event that was one of the largest audiences ever to assemble to hear the life giving teachings of the Most Honorable Elijah Muhammad 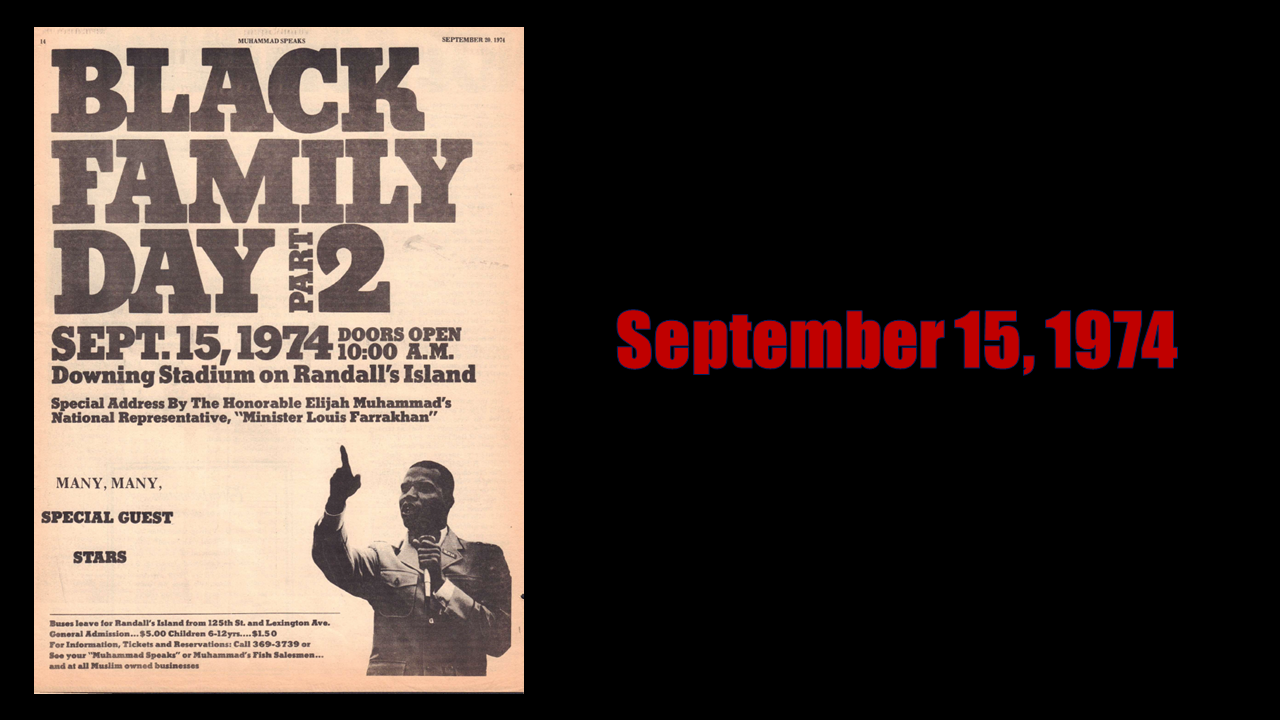 September 12, 1982 –“After five years of dedication to re-establishing the Nation of Islam, Min. Farrakhan dedicated this “small version of our Father’s house,”—The Final Call Administration Building located at 734 W. 79th Street in Chicago.  The building was dedicated to the Teachings of the Honorable Elijah Muhammad. “This building, The Final Call, is dedicated to life,” wrote Min.  Farrakhan in The Final Call newspaper.” -Toure Muhammad, Chronology of NOI History 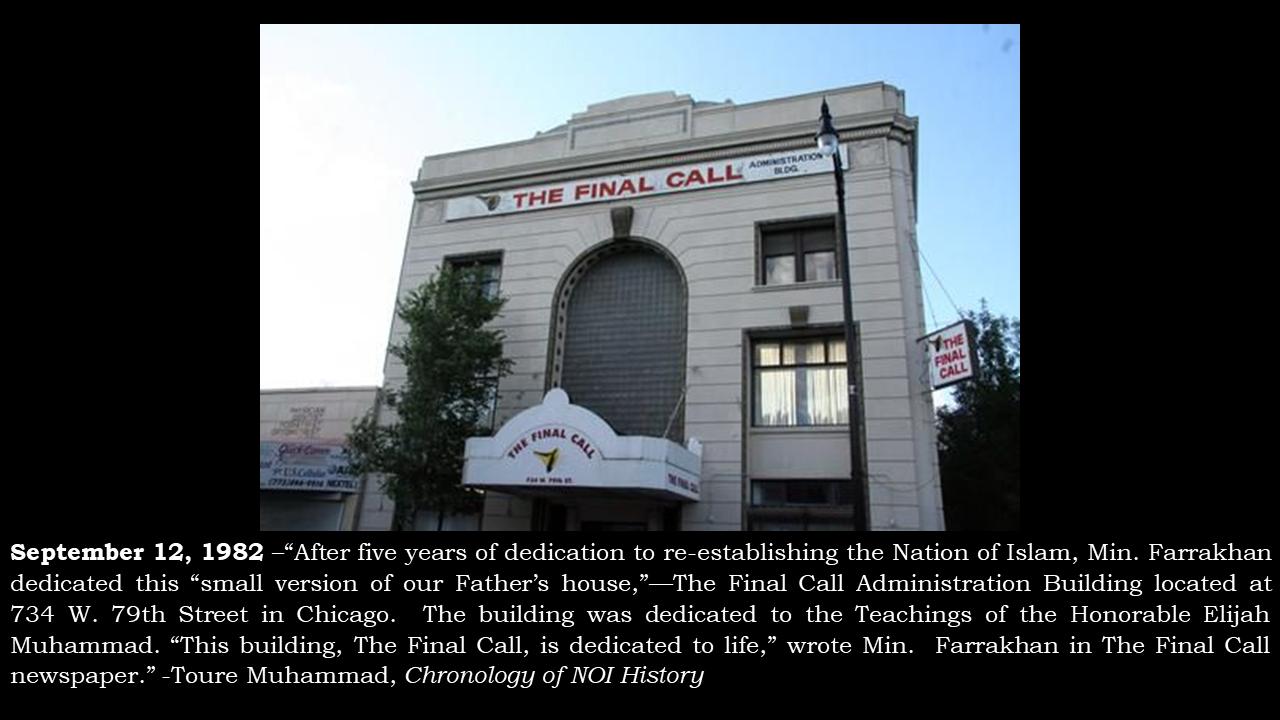 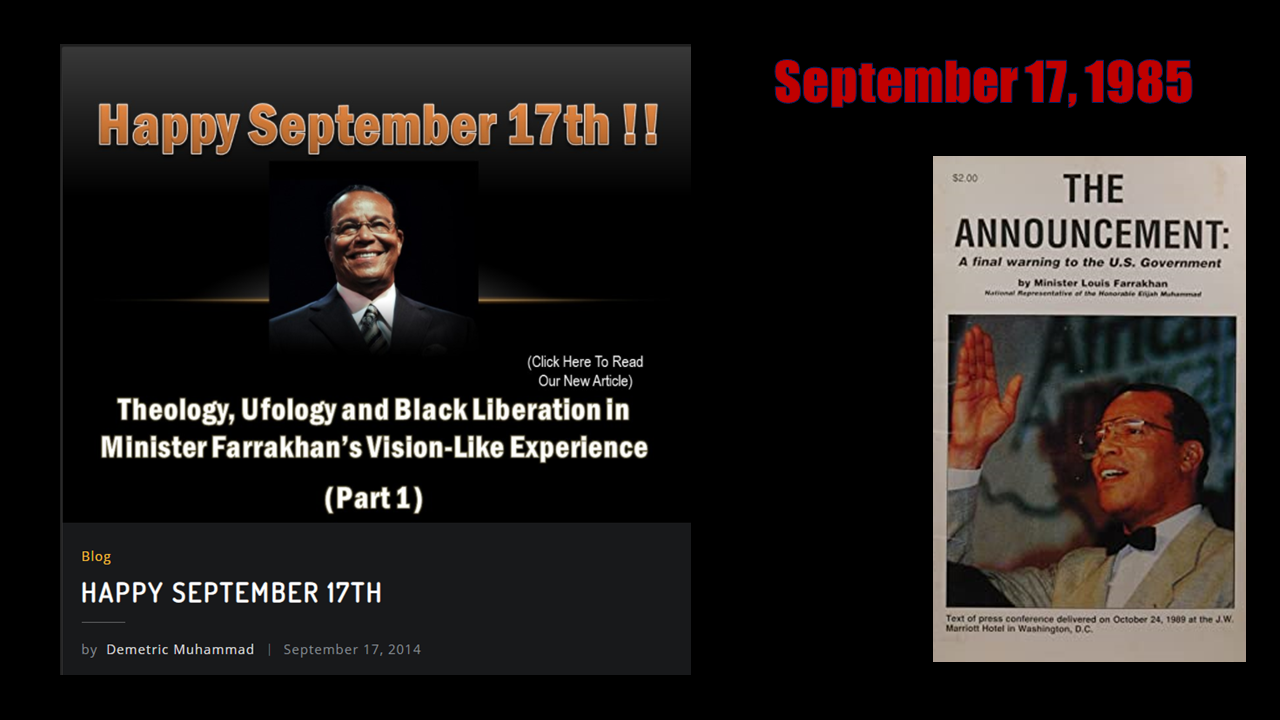 September 14, 1985 –Minister Farrakhan speaks to 19,000 in Los Angeles, which was at that time, the largest assembly to ever hear the life-giving teachings of the Most Honorable Elijah Muhammad in the Western United States.

September 6, 1989 –The Muhammad University of Islam re-opens in Chicago to offer independent education to the children of the Nation of Islam and Black America. 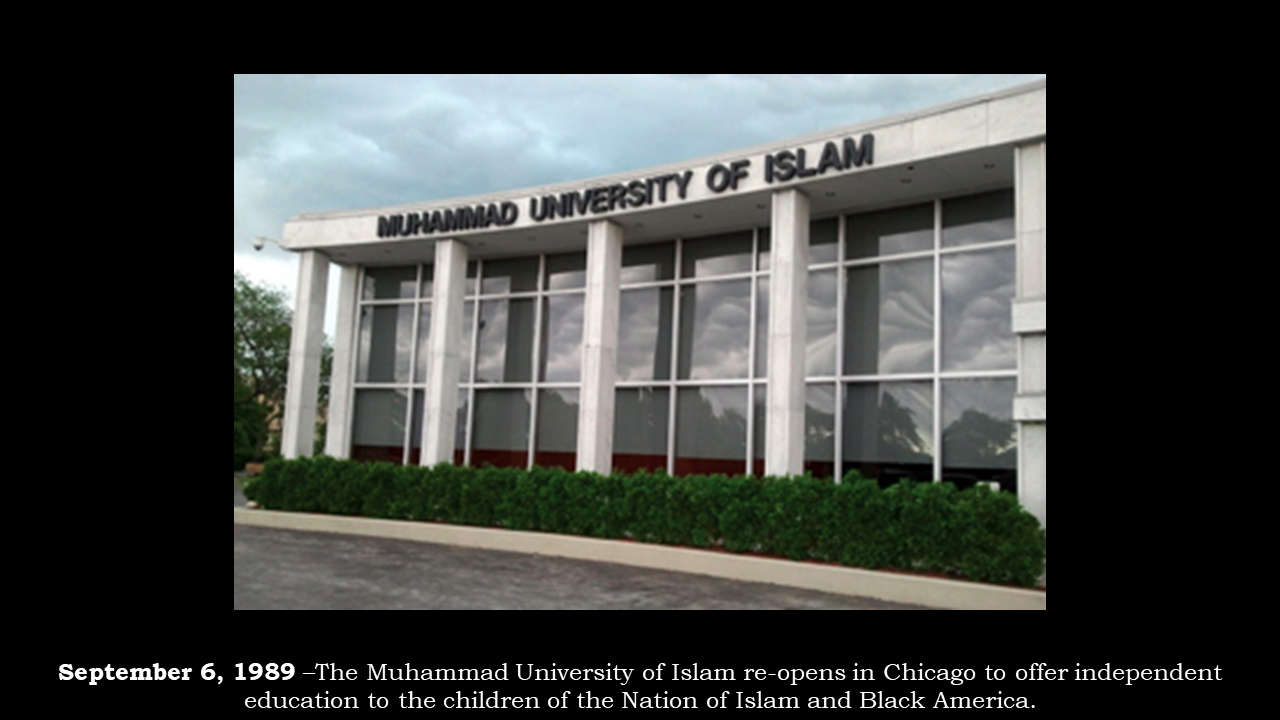 September 21, 1986 –Minister Farrakhan delivers a major address in Phoenix, Arizona entitled Self-Improvement: The Basis for Community Development.  This speech was the beginning of the Self-Improvement Study Course.  This course today includes 21 study guides designed provide divine guidance along the path of moral and spiritual resurrection

September 6, 1993 -Honorable Minister Louis Farrakhan addresses the World Parliament of Religions in Chicago, IL.  The minister’s brilliant and inspiring message captured the love and admiration of a very diverse audience of leaders from the world’s religious and ethnic communities. 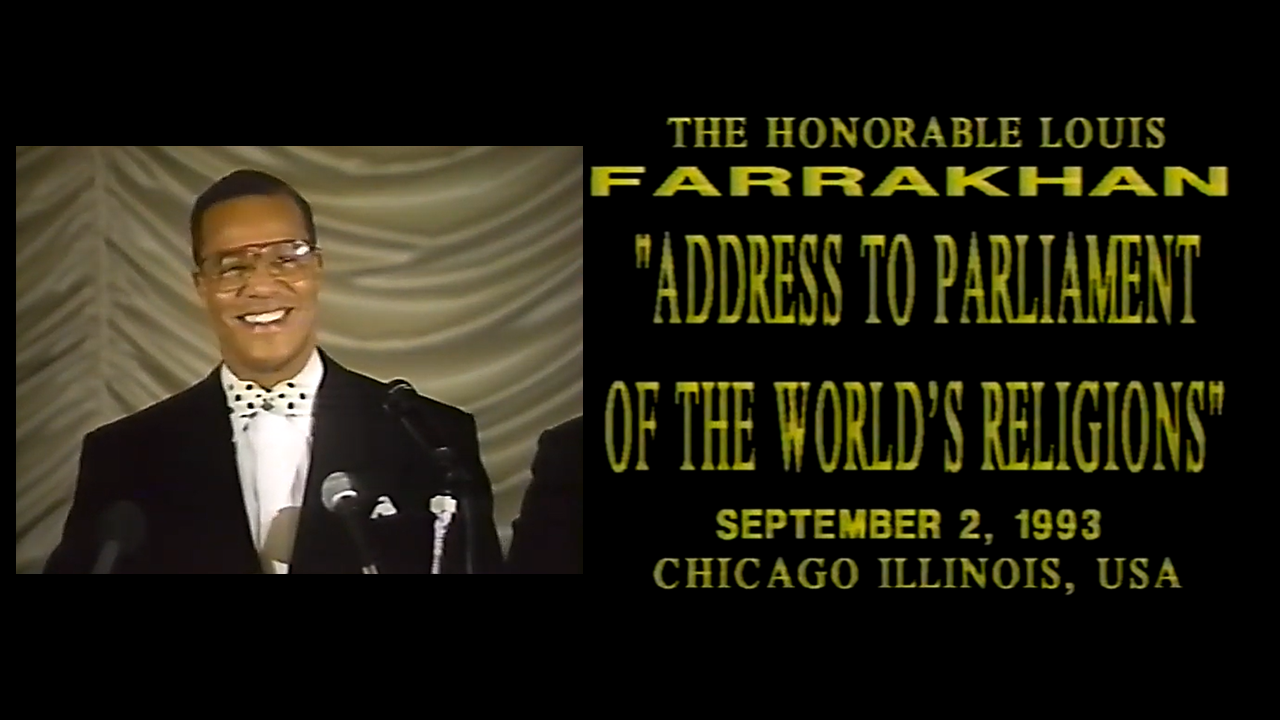 September 19, 1995 –At Howard University’s Rankin Chapel Black leaders declare October 16 a Holy Day.  October 16, 1995 is the date of the Million Man March where nearly 2 million men came at the call of Minister Farrakhan around the theme of atonement, reconciliation and responsibility. This is the largest gathering at the U.S. Mall in American history. 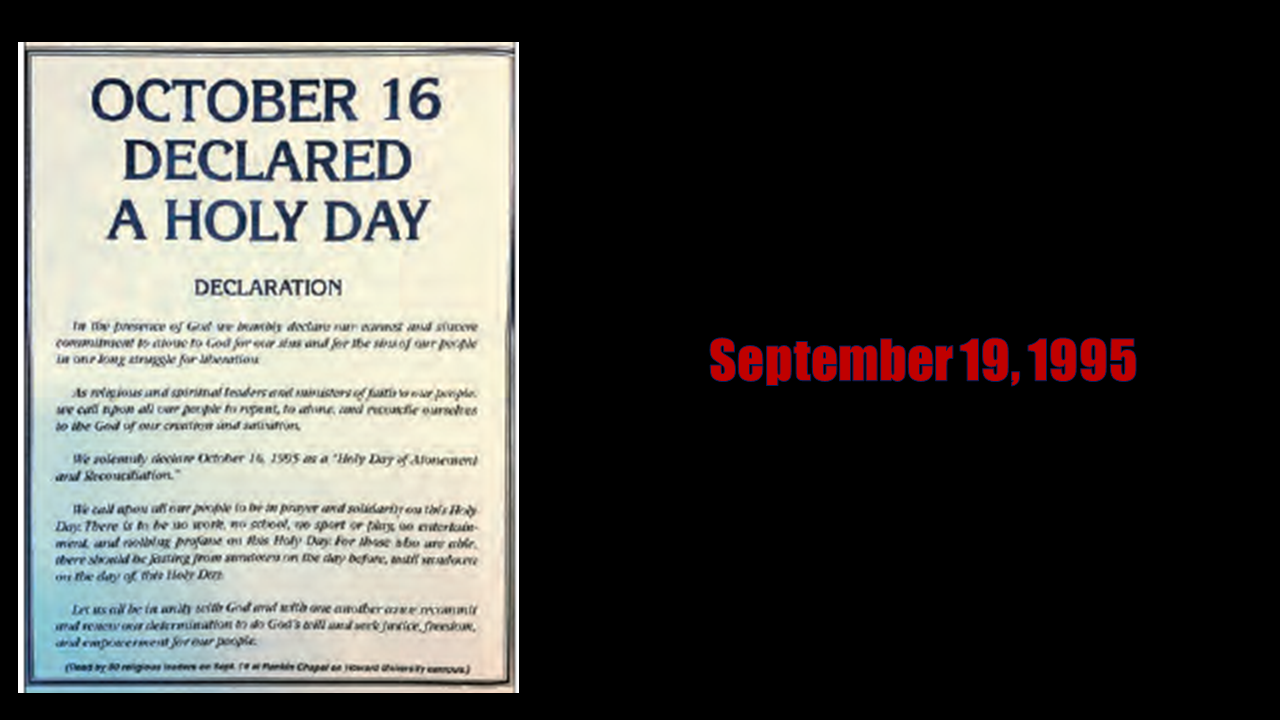