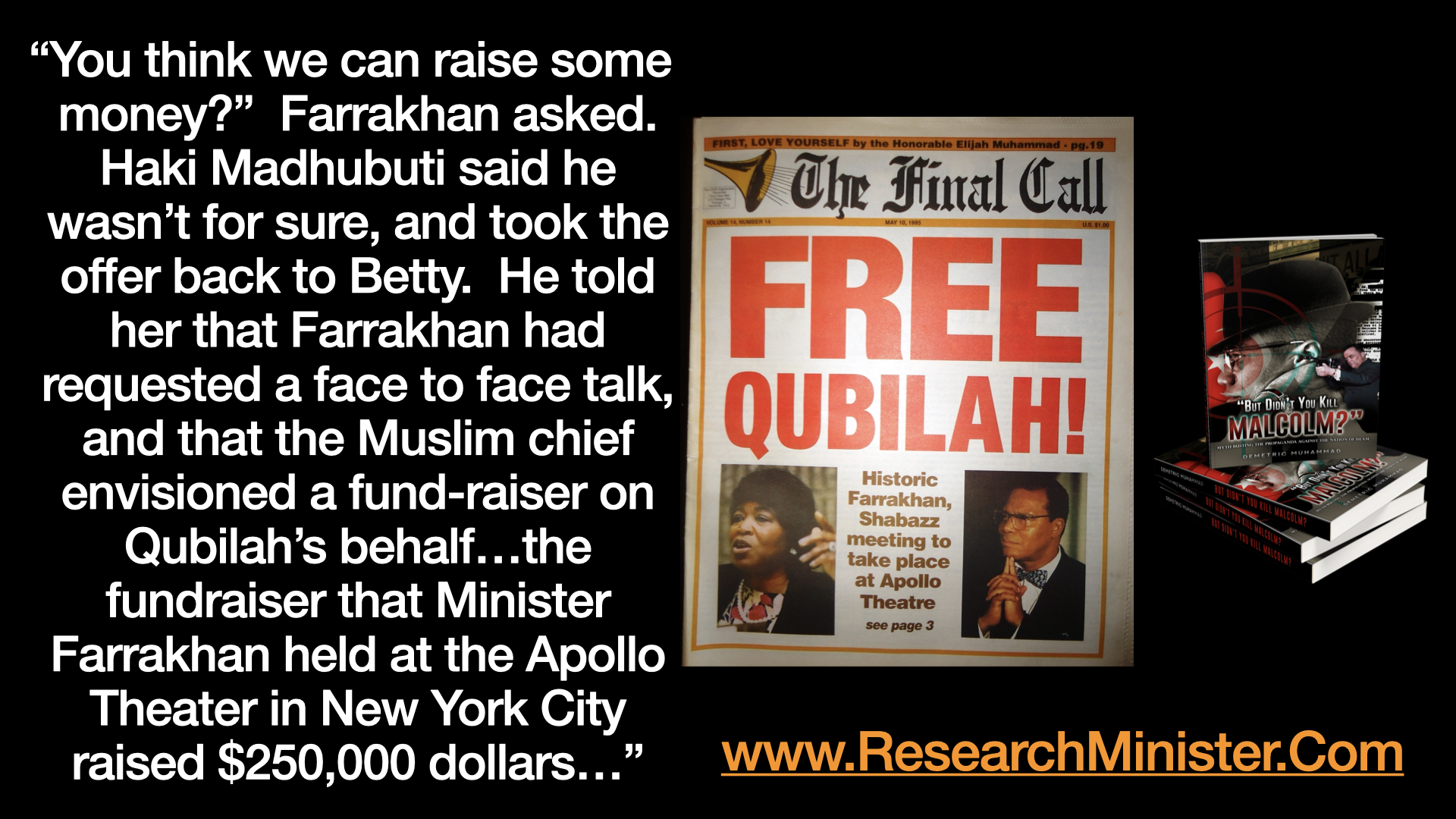 It is important also for the reader to know that during this same period of time-the late 1980s and early 1990s-that it was discovered that the FBI had arrested the daughter of Malcolm X for plotting the murder of Minister Farrakhan.  In 1995 an FBI informant by the name of Michael Fitzpatrick reported to the FBI that Qubilah Shabazz hired him to murder Minister Farrakhan.  It was later discovered that Fitzpatrick was a Jewish zealot who had been a member of the Jewish Defense League and had a long criminal history. Author Jon Dee writing for the Lumpen Times describes the nefarious history of Fitzpatrick.  An excerpt of his coverage of the case includes the following:

“It was the defense team who revealed the identity of the FBI’s “hit-man” informant. The FBI and prosecutors tried to keep him shrouded in secrecy, but were required to divulge his identity in the indictment proceedings. Considering what has become known about him, it is little wonder that federal officials still refuse to “confirm or deny” any details.

Michael Kevin Fitzpatrick, alias Michael K. Summers, age 36, is a paid FBI informant who perfectly matches the profile of a Bureau infiltrator/provocateur, and has been involved in a number of FBI operations against political targets over 15 years. His first job as an informant was at age 18 in 1978 when he helped bust a planned bombing by the Jewish Defense League (JDL). Since then he has been in the Federal Witness Protection Program, while simultaneously fomenting violence among political groups of wildly differing ideologies.

Fitzpatrick and Shabazz met and became friends when they attended the United Nations International School, an upper-crust private high school in Manhattan. Former classmates tell reporters that even as a youth Fitzpatrick was a “charmer” and “a bit of a con-artist”. They describe him as a misfit who “sometimes carried a gun to school, threatened other students and barely managed to skirt by without getting expelled.”

In the words of the NY Times, “He was notorious at the school for being confrontational, seductive and persuasive, as well as eager to become involved in controversial causes.”

Sari Gordon, a friend of Fitzpatrick, told the Washington Post that he “fancied himself as a freelance mercenary”. Two other former associates of Fitzpatrick’s quoted by the Associated Press also characterized him as a “violent racist”.

Minister Farrakhan and the Nation of Islam came to the aide of the daughter of Malcolm X.  The Minister took the position that the daughter of Malcolm X had been manipulated by Fitzpatrick who was working on behalf of the FBI to incite violence and frustrate the movement for unity within the Black community.  Minister Farrakhan suggested that he and the Nation of Islam should raise money to support Qubilah Shabazz and her young son Malcolm.  According to Russel J. Rickford, the biographer for Betty Shabazz:

“A long, costly trial seemed likely, though the defense team was working pro bono.  “You think we can raise some money?”  Farrakhan asked.  Haki Madhubuti said he wasn’t for sure, and took the offer back to Betty.  He told her that Farrakhan had requested a face to face talk, and that the Muslim chief envisioned a fund-raiser on Qubilah’s behalf…The next day she agreed to a private meeting.  She believed that the FBI had planted an infiltrator in Qubilah’s life to revive an ideological (if not physical) Black civil war, and she was genuinely grateful to Farrakhan for refusing to go for the ruse.”

According to Rickford, the fundraiser that Minister Farrakhan held at the Apollo Theater in New York City raised $250,000 dollars. Betty Shabazz spoke at the standing room only event and shared words of gratitude and appreciation to Minister Farrakhan:

“I would like to thank Mr. Louis Farrakhan, you know him as Minister Farrakhan, for his original gentle words of assurance for my daughter and myself and her sisters.  As he said, ‘We will have to help Brother Malcolm’s family.’ I like the way he said that, and I hope that he continues to see my husband as ‘Brother Malcolm.’  Minister Farrakhan, may the God of our forefathers forever guide you on your journey.  May your conceptual framework keep broadening.”

This is an extraordinary sequence of events that highlights and exposes the genuine and sincere love that the Honorable Minister Louis Farrakhan possesses for the Black community.  He literally came to the defense of a young woman who had planned his death!  This is an unprecedented act of love that was guided by the Minister’s wise understanding of the nefarious history of the United States Government’s efforts to sabotage the movement for Black unity and liberation.  This is no doubt an occasion where I reflect upon the words of the Honorable Elijah Muhammad to Minister Farrakhan when he told him that “the enemy has set many traps for you brother, but you won’t get caught in any of them.”  The Minister refused to go along with the government’s plan.  He denied them their expected reaction.  They were hoping that his reaction would include strong language, harsh words and a public condemnation of Qubilah Shabazz-the daughter of Malcolm X.  They wanted those in the Black community who are loyal to Malcolm X to be at war with those who are loyal to Minister Farrakhan and the Nation of Islam.  They were hoping to inspire an internecine war.  This evil plan of the FBI was their attempt to pour salt inside of the open wound that the Black community has been suffering from since the assassination of Malcolm X. But Minister Farrakhan’s unexpected reaction thwarted their plans.

THE ABOE IS EXCERPTED FROM THE GROUND BREAKING NEW BOOK, BUT DIDN’T YOU KILL MALCOLM: MYTH-BUSTING THE PROPAGANDA AGAINST THE NATION OF ISLAM. ORDER HERE