The Magnificent & Brilliant Professor Toni Morrison: An Oracle For Her People and Their God 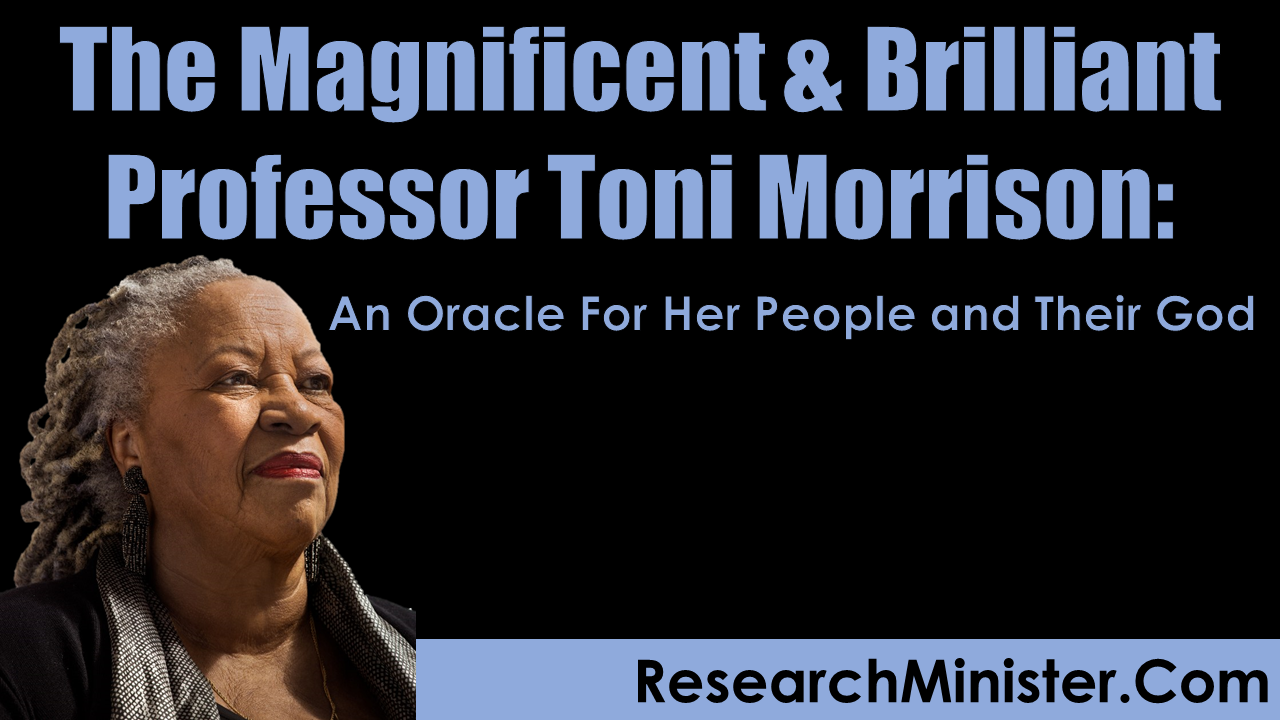 “It does not befit Allah to address any human being except by inspiration, or from behind a veil, or He sends a messenger who then reveals by His permission whatever He wills. He is indeed Most High, All-Wise.”

Throughout the breadth and scope of the teachings of the Most Honorable Elijah Muhammad there is a great reverence for the achievements and accomplishments of Black people.  And ever since I became a student of his teachings under the guidance and example of the Honorable Minister Louis Farrakhan, I have had an increase in my own awareness of the infinite number of esteemed and awe-inspiring brothers and sisters who have mastered their respective disciplines and fields of endeavor.

I became aware of Professor Morrison’s work years ago while I was in college.   And I had always wanted to learn more about her and her work, but I never got around to it.  She was among a growing list of inspiring examples of Black excellence that I always tell myself, that one day I am going to learn more about them.  As a student of Minister Farrakhan, I know that the more I learn about the greatness of my people is the more I learn about the greatness of God.  For the Minister has for years trumpeted the fundamental idea and truth of his teacher, the Most Honorable Elijah Muhammad, that forthrightly states, elucidates and explains the Black man and woman’s capacity for divinity.  So I believe that my people are uniquely and innately configured to be reflections of and vessels for the presence of Allah (God).

A few years ago, Professor Morrison came back on my radar when I attended one of my family reunions.  There I learned about the work of my cousin Dr. Carolyn Denard who worked closely with Professor Morrison as a friend and colleague.  She founded and presides over the Toni Morrison Society.  It is the 41st author society affiliated with the American Literature Association; it is the fourth dedicated to a Black author.  I said to my cousin that I was going to follow up with her to learn more about Professor Morrison and her work to study and preserve her work.  But once again, I didn’t get around to it.

Over the past few days, however I have paused to try and learn as much as I can about Professor Morrison since hearing the news of her passing.  I have read  academic journal articles; reviews of her books and watched hours of her interviews.  And I have an order of her books. Watching her interviews was for me particularly educational and inspiring.  It reminded me a lot of watching the interviews of my teacher, Minister Farrakhan.  Watching interviews of prominent Black people by major mainstream news organizations is like watching a championship boxing match.  There is always a question or several questions posed to the Black luminary by the white interviewer that is hostile, obtuse or belittling.  But I have to say that in the case of both Minister Farrakhan and Professor Morrison, their brilliant responses to such questions are like the masterful combinations of knock-out punches executed by the likes of Muhammad Ali or Mike Tyson against the “glass-jaw” of an unworthy opponent.

Professor Morrison was just so regal, strong, unapologetic and armed with indefatigable intellect.  As I watched this beautiful sister be both heralded and critiqued in reviews and interviews I began to think about how Minister Farrakhan has taught me to always look for the hand of God in everything.  So I began to look into Professor Morrison to see if I could see Allah (God).  And it didn’t take long for me to see her as an instrument of Allah (God) that had been gifted to her people and also gifted to America by Allah (God) Himself. 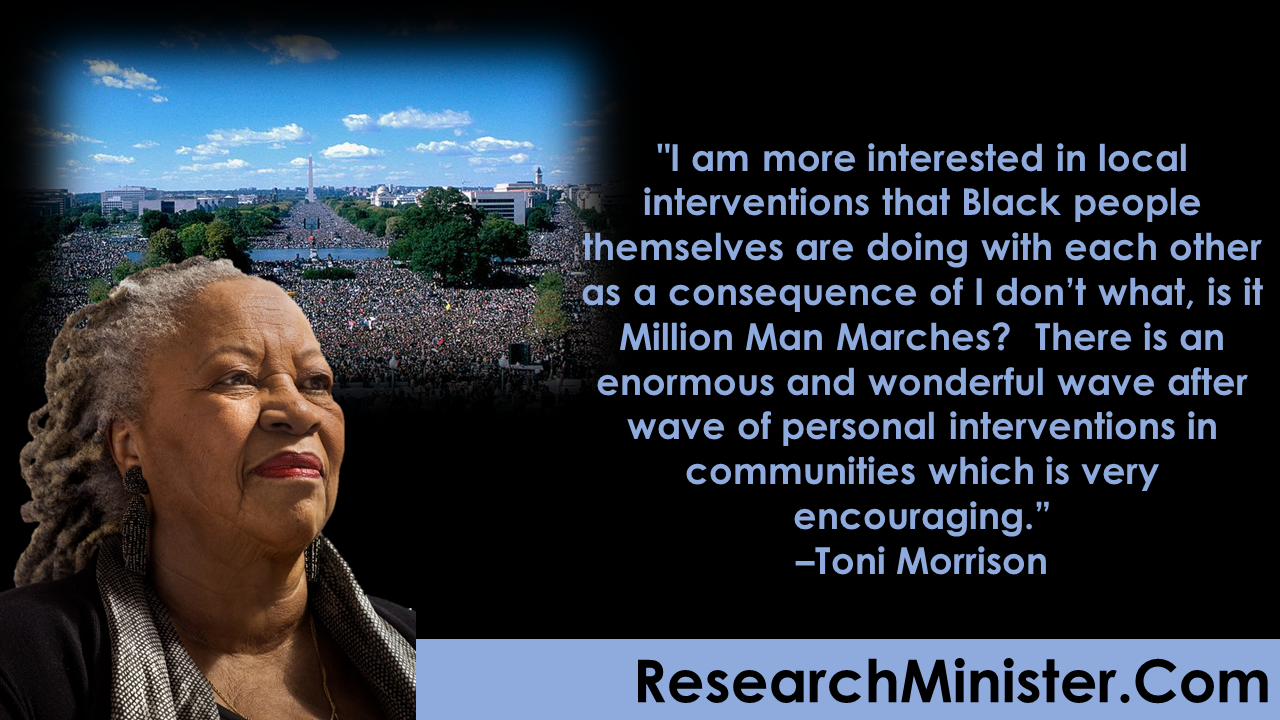 I fastened on to a short section of an interview with National Public Radio (NPR), where she talked about her mother and that her mother was named “Ramah.”  When I looked further into it I saw that her mother’s name was Ella Ramah Wofford.  The name Ella and the name Allah are related.  According to the C.I. Scofield’s First Study Bible the English word “God” in Genesis Chapter 1 requires the following explanatory note :

“Elohim (sometimes El or Elah), English form “God,” the first of the three primary names of Deity, is a uni-plural noun formed from El=strength, or the strong one, and Alah, to swear, to bind oneself by an oath, so implying faithfulness.”

Legendary Islamic Scholar Maulana Muhammad Ali writes in the book The Religion of Islam that the 2 most oft repeated attributes or names of Allah (God) found within the Holy Qur’an are Rahman (The Beneficent) and Rahim (The Merciful & Compassionate).  These two names introduce every Surah or Chapter of the Holy Qur’an except Surah 9.  He explains that:

“Rahman and Rahim are derived from the one root rahma, which means tenderness requiring the exercise of beneficence, and thus comprise the ideas of love and mercy.”

Professor Morrison’s father was named George, a name that morphs out of the Greek Georgios and means “farmer or earthworker”.  Farming and Horticulture was the first occupation that God gave to Adam in the book of Genesis in the Bible.

Professor Morrison’s name at birth was not Toni.  It was Chloe, which means “verdant, young green shoot”.  It too is Biblical, as it draws attention to verses such as found in the Bible’s books of Isaiah and Jeremiah:

“to provide for those who grieve in Zion— to give them a crown of beauty for ashes, the oil of joy for mourning, and a garment of praise in place of a spirit of despair. So they will be called oaks of righteousness, the planting of the LORD, that He may be glorified.”-Isaiah 61:3

“But blessed is the man who trusts in the LORD, whose confidence is Him.  He will be like a tree planted by the waters that sends out its roots toward the stream. It does not fear when the heat comes, and its leaves are always green. It will not worry in a year of drought or cease producing fruit.”-Jeremiah 17:7-8 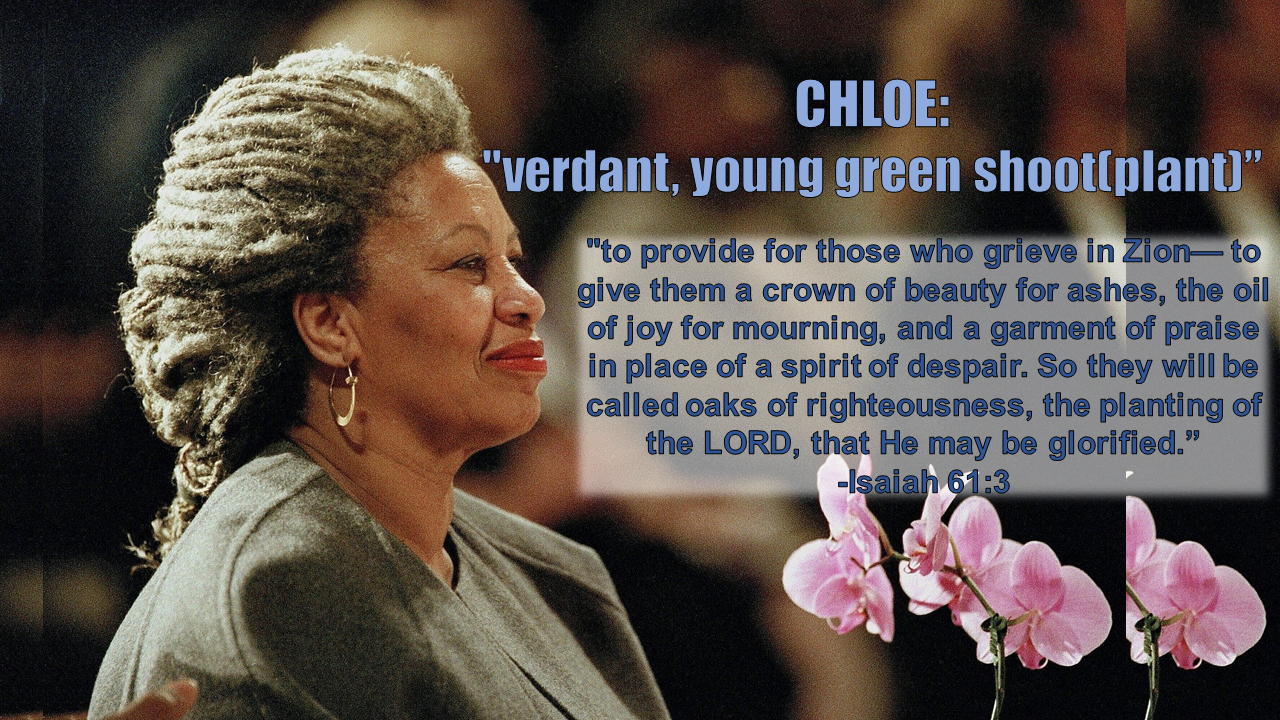 Names mean a lot.  The Bible speaks of how ‘a good name is better than gold’.  The Holy Qur’an speaks of how it is Allah (God) that has the best of names.  And the names of Professor Morrison and her parents are indicators of what became her marvelous destiny, not just a literary destiny-which is what most perceive her accomplishments as.  No, Professor Morrison’s was and is a divine destiny.

I say it is divine for several reasons.

In the classical Islamic view, Allah’s (God’s) first act of creation was the pen and He commanded it to write.  So as a writer of immense skill and immeasurable talent, I see Professor Morrison as beautifully, eloquently and powerfully plying her trade in the most ancient and divine of occupations.  That Allah (God) is a Writer and Teacher is borne witness to in how the Bible and Holy Qur’an record His intervention into the affairs of men and nations.  Over and over again we read of Him consistently giving to specific people and nations a man and a book; albeit a prophet and a prophecy; a messenger and a message; a teacher and a teaching.  What the people of religion relish and delight in of sacred texts from God today was first written by Allah (God) on the heart and minds of humble and divine servants-the prophets and messengers-long before it was ever written on paper. 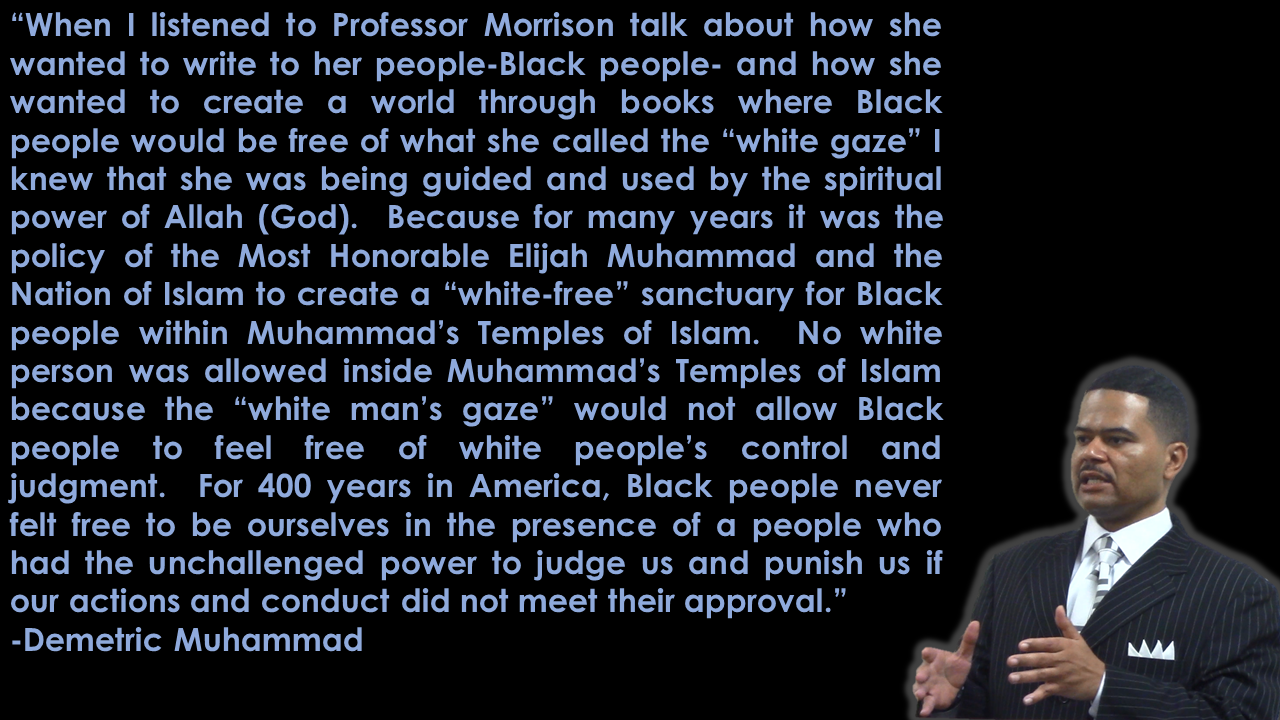 When I listened to Professor Morrison talk about how she wanted to write to her people-Black people- and how she wanted to create a world through books where Black people would be free of what she called the “white gaze” I knew that she was being guided and used by the spiritual power of Allah (God).  Because for many years it was the policy of the Most Honorable Elijah Muhammad and the Nation of Islam to create a “white-free” sanctuary for Black people within Muhammad’s Temples of Islam.  No white person was allowed inside Muhammad’s Temples of Islam because the “white man’s gaze” would not allow Black people to feel free of white people’s control and judgment.  For 400 years in America, Black people never felt free to be ourselves in the presence of a people who had the unchallenged power to judge us and punish us if our actions and conduct did not meet their approval.

It is this aspect of her brilliant writing that seemed to inspire the envy of many interviewers and critics of her work.  They seemed to envy the fact that a woman who was being celebrated and dubbed ‘the best writer that America ever produced’ could write so beautifully, so powerfully, so richly, so imaginatively, so descriptively and exclude the dominant race of people in America-the white race.  And she remained gracefully unapologetic about her choice to exclude white people from having any centrality within her books.

I particularly enjoyed watching a BBC documentary about Professor Morrison.  It was in those interviews where I first heard her talk about her parents.  She loved her parents so much; and her parents loved her so much.  She mentioned how as a little girl she felt so protected when she saw her father throw a white man down a flight of stairs who was bothering their family; which was no small thing to do during the dangerous days of Jim Crow laws that didn’t respect a Black man’s right to defend the honor of his women and children.  But most significant to me was her describing the way in which the characters in her books lived inside her own mind and would speak to her.  She didn’t spend a lot of time on that thread of the conversation with the interviewer, perhaps because most artists and creative people are rather shy and guarded about their private process.

Professor Morrison’s words have captured the hearts and minds of men and women from around the world.  And she has drawn praise from both the oppressor’s class and the oppressed.  I would have loved to have been able to ask Professor Morrison if she had ever considered the divine implications of her work and whether or not she ever perceived herself as an oracle, a living vessel that our enslaved ancestors could speak through; that God could speak through.  God made the prophets story tellers,masters of dramatic narrative and artful communicators who used parables. 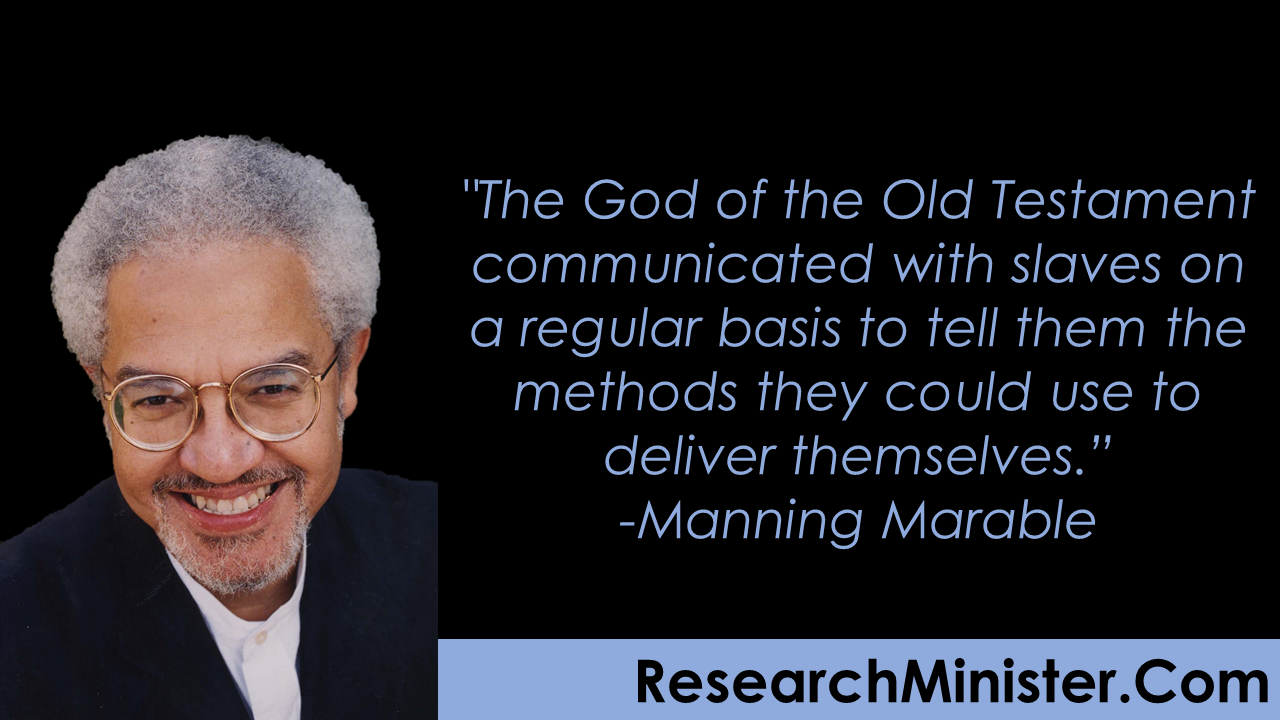 Professor Manning Marable wrote The Meaning of Faith in the Black Mind in Slavery and stated that :

“The God of the Old Testament communicated with slaves on a regular basis to tell them the methods they could use to deliver themselves.”

Literary fiction is creative writing.  But when we demystify the creative process we learn that there is no such thing as something as profound and impactful to people as Professor Morrison’s words have been, that just come out of nowhere.  My teacher, Minister Farrakhan said profoundly that “there is only one Creator, Allah (God)”.  The Minister went on to say that “all acts of creation originate within Him.”  I believe that Professor Morrison’s writings about slavery and the Black experience in America have their origin in Allah (God).  I am thankful that Allah blessed our people with such a glorious human pen who, poured into our lives rich ideas and thought provoking dramas and hope for a better world to come.  May Allah be pleased with her life and contribution to the liberation of our people.