The Politics of Prophecy: The Scepter of Rulership 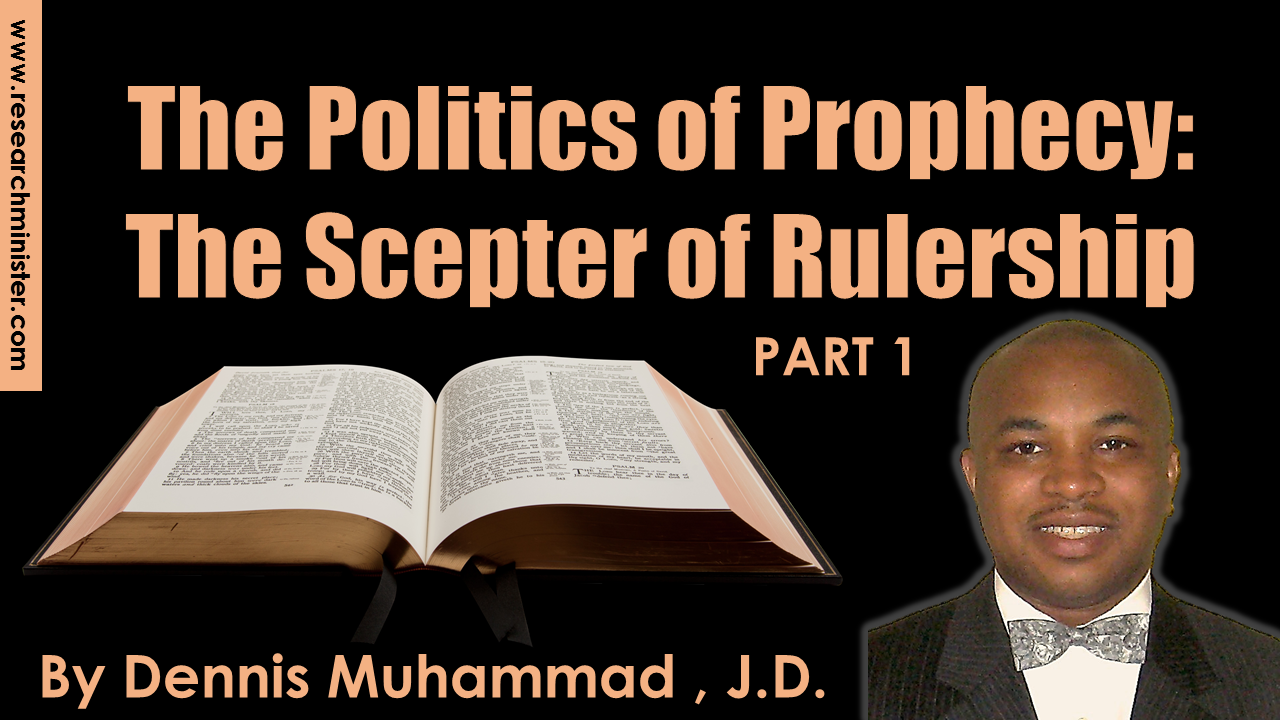 The Furor Over Farrakhan

The Honorable Min. Louis Farrakhan has been a magnet of controversy for over thirty-six years since he stood beside the Reverend Jesse Jackson in Jackson’s bid for the presidency in the mid 1980s. The impact of his life, work and mission has affected the pulse of America. Millions of reactions and responses to his messages have circulated through arenas, homes, churches, mosques, synagogues, newspapers, magazines, news stations, radio airwaves and now social media outlets. Minister Farrakhan’s defense of Reverend Jesse Jackson in 1984, however, struck a chord with the elements of the Jewish media, particularly Zionists pundits. The Honorable Min. Louis Farrakhan is not a politician. He is a spiritual guide, for millions of the “lost-found” Black people of America and numerous members of other ethnic groups, all of which he is guiding back to the true path of God. How does a spiritual man become the central iconic figure of political controversy in America? Why are Jewish writers, rabbis, pundits and organizations working so hard to suppress his speech and presence? Why are they so concerned about his influence in the Black community, particularly among Black political leaders, entertainers and athletes? 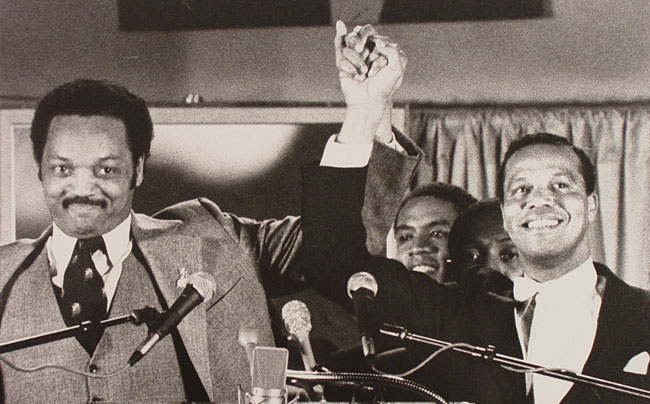 The Honorable Min. Louis Farrakhan has no history of violence. He has no record of deceit and treachery. He is not a conspirator of evil against any individual or people. He is the most transparent leader I have seen or met in my life. His life is an open book. His impact on history is not temporal or generational, but perennial. Testimonies are being written about his character and his great works are being documented by many of his students. In fact, generations from now, books and testaments will be written of him and his work as we are reading of prophets and messengers of the past today.

The Honorable Louis Farrakhan teaches that if the leadership of this country doesn’t know prophecy, they can’t guide this nation. In addition to that assertion, the helpers of the Honorable Louis Farrakhan cannot defend his position if we do not know prophecy. His work and mission are central to prophetic fulfillment. The Honorable Louis Farrakhan, in particular, is being singled out by Zionist forces because he understands the time of fulfillment. He is given a unique and difficult mission that distinguishes him from any secular or spiritual leader. His mission is to expose the makers of evil. He is relentless in the pursuit of this mission which puts him and those with him in the cross-hairs of political and spiritual warfare. Many common religious observers don’t understand his mission and his pursuit of justice for the poor and disadvantaged in America and the world. He is at war with extraordinary evil forces that expand beyond common black and white issues. His tactics and strategies to fight these evil forces do not include small minded racists, bigoted, and anti-Semitic remarks. Farrakhan is more than an individual. He is an institution; he is the embodiment of Black people’s struggle for Freedom, Justice and Equality. He represents these principles to the world in his life’s work. You can assess the significance and impact of the Honorable Louis Farrakhan by acknowledging the significance and impact of those who oppose him.  Great men have great enemies.  Powerful men have powerful enemies.  To understand his moves, motives and works, we have to have a thorough grasp of the scriptures. His work is summed up in the following biblical scripture.

“We war not against flesh and blood, but against powers, and principalities and the rulers of darkness in this world and spiritual wickedness in high places.”  –Ephesians 6:12

History is dimensional, past, present and future. Prophecy is future history or history written in advance. Prophecy gives the reader insight on the future. A reader of prophecy may not know he or she is reading prophecy unless he or she is able to interpret or see the fulfillment of signs and symbols. The value of the Honorable Elijah Muhammad is that Allah (God) revealed to him the secrets of history.  Within his teachings he provides a necessary separation of  the dimensions of past, present and future history contained within the scriptures of  the Bible and Holy Qur’an.

Prophecy is important because it gives us a script of predictions of activities and events going on in Nations today. The scripts of the Bible and Holy Qur’an predict conflicts among nations and righteous people against wicked people. If the script is prewritten, modern actors must play their parts. This is why scriptures in the Bible and Holy Qur’an impact peoples and nations today. It is a long list of those auditioning for the roles of pharaoh, Nebuchadnezzar, Belshazzar, Caesar, Herod, Pontius Pilot, Pharisees, Sadducees and Judases. What figures will stand up and assume the roles of Moses, Jesus, Muhammad, the children of Israel, the disciples, and Muhajarreen and Ansar helpers of Muhammad?

Zionist pundits and Talmudic scholars are not lost on the politics of prophetic fulfillment. The Honorable Elijah Muhammad points out that the Black people of America are the Chosen people of God. For centuries Jewish historians and scholars worked to hide the truth of identity of the real chosen people of God. The Holy Qur’an charges parties from among the Jewish scholars with hiding the truth while they know.

“Do you then hope that they would believe in you, and a party from among them indeed used to hear the word of Allah, then altered it after they had understood it, and they know this.” –Holy Qur’an 2:75

The above verse from the Qur’an points out that the Jewish scholars understood that there would be a prophetic transfer of power. As recipients of divine revelation, they saw no problem with putting their pens over Allah’s words in determining prophetic outcomes.

Jewish scholars understand the ramifications of prophecy. They understand that Islam is the only spiritual and political force to undermine Zionist hegemony and dominance over Western Judeo-Christian society. Their efforts today are to co-opt the power and influence of Islam and make it an “agent” force like it has made Christianity. America is a Judeao-Christian society and Zionists want to make the predominantly Muslim Holy Land a Judeao-Islamic society.

Benjamin Disraeli wrote of the agenteur as the whole body of agents and agencies to be used by the Zionist through “The Political” which he referred to as the entire machinery of politics. The system of politics was created by them to control governments and recruit agents into those government to sell out the rights and interests of the common people.

Historically speaking, Islam has not been an international military force since September 11, 1683 when Islam was defeated at the gates of Vienna preventing Islam from becoming a military super power in the West. Since the defeat at Vienna, Islam has grown as a spiritual power, but has declined as a military force. No leader had emerged to replace the Islamic Caliphate that could unite Islam as a universal force until the coming of the Great Mahdi, Wali Fard Muhammad to America in July 1930.

“Allah is He who created the heavens and earth and what is between them in six periods, and He is established on the Throne of Power. You have not besides him a guardian or intercessor. Will you not then mind. He orders the Affair from the heaven to the earth; then it will ascend to Him in a day the measure of which is a thousand years as you count.”

The above verses document the fall of Islam as a political power and its rise after a period of 1000 years. Eighty-one days before his death, Prophet Muhammad delivered his last public address in 631 AD. He revealed the following words, “This day have I perfected for you your religion and completed my favour to you and chosen for you Islam as a religion.” He commented that Islam would retain its purity for 300 years and there would be a decline of Islam for 1000 years until the arrival of two powerful spiritual figures, Imam Mahdi and the Messiah,whom will upset the political powers of the modern world. From the time of the Prophet’s departure in 632, we can add  the referenced periods of time of 300 and 1000 years.  This means that 1932. The Most Hon. Elijah Muhammad met Master W. Fard Muhammad in September 1931, which is approximately 1932.  No one knew where the meeting of these two powerful spiritual figures would appear, but the Honorable Elijah Muhammad pointed out in his Saviour’s Day 1974 message that the sun would reverse itself in the latter days and rise in the West. The Bible also gives a hint to the birth of the predicted Saviour being born in the West.  The Biblical version of the Jesus’ birth in the Book of Matthew give an account of how the Baby Jesus (Messiah) will be located.

“When they heard the king, they departed; and behold, the star which had been seen in the East went before them, til it came and stood over where the young child was. When they saw the star, they rejoiced with exceedingly great joy. And they had come into the house, they saw the young Child with Mary his mother, and fell down and worshipped him. And when they opened their treasures, they presented gifts to Him: gold, frankincense, and myrrh.”

According to the Teachings of the Honorable Elijah Muhammad, this scripture gives a prophetic and symbolic picture of the birth and location of the Messiah. It is important to point out, that the wise men first saw the star in the East. The East is the Holy Land where the majority of the prophets did their work. However, the star went before them and stood over where the child was. Over, used here could mean the opposite direction. Consider that a star moving upward from the East would be in the North; if it was described as downward we would expect it to be located in the South. And if the star moved over from the East, it suggest that the likely position of the star is in the West. The West is the Western Hemisphere in North or South America.

The Honorable and Elijah Muhammad and Mahdi Wali Fard Muhammad met in Detroit, Michigan between August and September 1931. The meeting of these two men activated dormant Biblical and Qur’anic prophecies and the birth of the Lost-Found Nation of Islam in the West. Fifty-three years later, the politics of prophecy would erupt between the Honorable Louis Farrakhan and the Jews. The Jesse Jackson campaign was the igniter of the controversy. The eruption of the politics culminated with the Honorable Louis Farrakhan’s declaration that the Black people of America are the Chosen people of God during his P.O.W.E.R. at Last and Forever lecture series.