A Mirror of Truth: The Impeccable Character and Sublime Morals of the Honorable Minister Louis Farrakhan 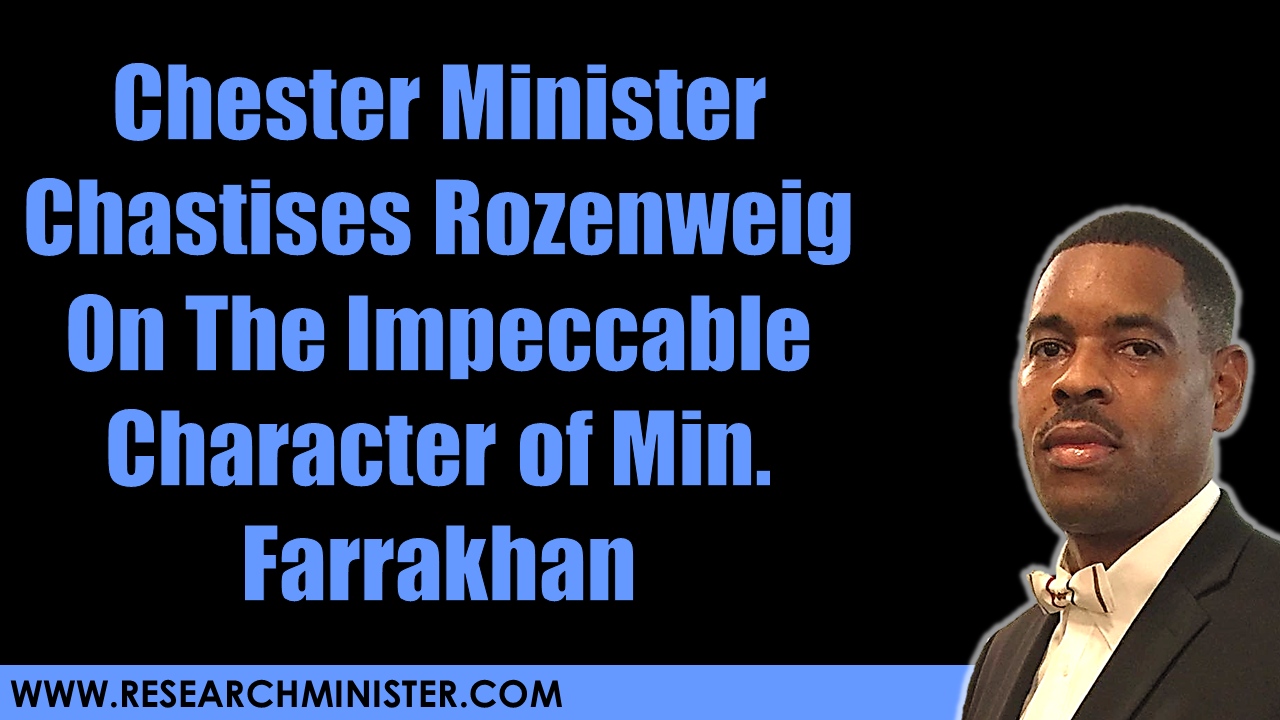 “Before them the people of Noah and the parties after them rejected (prophets), and every nation purposed against its messenger to destroy him, and disputed by means of falsehood to render null thereby the truth, so I seized them; how (terrible) was then My retribution!”  -Holy Qur’an 40:5

In a recent op-ed on Isreaelnationalnews.com, titled Mirror Mirror on the wall who is the most anti-Semitic of all? Farrakhan, Rashi Rozenzweig repeats a series lies and half-truths, that have been rehearsed for over 3 decades, in an attempt to render null thereby the truth.  He is the latest in a long line of slanderers who continue to promote the false narrative of the Honorable Minister Louis Farrakhan as an anti-Semite and a hater. This narrative along with “mischief being framed by law” is designed to not only to turn people away from the truth, but it is also to foster a climate in which the Minister may be arrested and or killed.

Mr. Rosenzweig in his op-ed mischaracterizes the Honorable Minister Louis Farrakhan as anti-Semitic, narcissistic and, one who is madly obsessed and jealous of the Jewish people. He calls the Minister a self-proclaimed messiah of black people who teaches blacks its ok to hate, especially whites, and finally he states “somebody has to publicly stand up against Farrakhan and shame him dramatically in front of millions.”

Minister Farrakhan is the very antithesis of a narcissist; he is a humble, selfless, sacrificing servant of God and his people. For over 64yrs he has worked to uplift the downtrodden black man and woman of America, and oppressed people all over the world. He has sacrificed his health, time with his family and a lucrative career in music, only to be evil spoken of, vilified and rejected by many of the very people he has sacrificed so much to uplift. Yet at nearly 86 years of age he continues to work tirelessly on behalf of his people. He has inspired in me and countless thousands of other men and women, selflessness and a sacrificing spirit to work on behalf of others. He is egoless and refuses to accept personal acclaim for his many accomplishments and the great work he continues to do. He represents himself, always, as a student of The Honorable Elijah Muhammad, and gives any and all praise directed towards him to All Mighty God Allah and His Christ.

The only evidence presented by the writer of this supposed narcissism, is how the Minister, to use his words, “speaks of himself highly and in the 3rd person so often.”  As students of the Honorable Elijah Muhammad we are taught of the danger of using the personal pronoun “I”. The Minister in his monumental lecture and study course entitled Self Improvement the Basis For Community Development made the following statement:

“The only reason you can say I is because the True I has shared a part of His I AM with you, that you may be…. He, Allah, God, places in you a Power from Himself….”

He teaches us to never speak independent of Allah (God). It is my belief that the Minister, especially when noting something good or great about himself, may speak in the 3rd person out of a deep humility that refrains him from using the pronoun “I”. If you take notice on the occasion, which is not often as the writer states, when he speaks in this manner he uses the “The Minister” and “Brother Farrakhan”, a title and a name both conferred on him by the Honorable Elijah Muhammad. He has stated that he sees himself as a little boy, playing with marbles, inside of this man that Allah is using to do these great works. I was personally present to witness the joy on his face when an artist unexpectedly presented him with a painting portraying this description he made of himself. One only needs to spend a few moments in his presence to sense the deep humility and love of this special servant of God, he treats everyone he meets with the honor and respect due another human being.

Minster Farrakhan is a teacher of the unadulterated truth. In the more than 40yrs of rebuilding the works of the Honorable Elijah Muhammad and teaching millions across America and the world, not one student or follower of his has committed any act of hatred towards Jews, Whites or any person or groups of persons he is falsely accused of hating. He teaches us to see value in every human being and to search the words of even our worst critics in order to see if there is any truth in them.  He like his teacher before him, teaches that the best religion anyone can practice is to do unto others as you would have done unto you. Far from a hater, Minister Farrakhan is a lover of humanity, a courageous speaker of truth and a fighter for freedom justice and equality for all human beings. Above all he is an anointed service of God whose works testify of him.

Minster Farrakhan and the Nation of Islam’s sole purpose is the resurrection of the mentally and spiritually dead black man and woman of America. It is Mr. Rosenzweig and his fellow Zionist who are obsessed and truly terrified of Minister Farrakhan and the truth that he speaks. Negative articles and blogs, slandering the Minister, attacking anyone even closely tied to him and even trying to associate him with murderous white nationalist, have appeared nearly every day for the last year and a half. Mr Rosenzweig himself has published two such articles in the same week.

Newsweek recent published and online article about the funeral services of slain hip hop artist and community activist Nipsey Hustle, in which they mentioned Minister Farrakhan’s name along with others who spoke at the service. Newsweek was forced by Jewish leadership to update the article and insert their standard slander of the Minister. Talk about obsession! 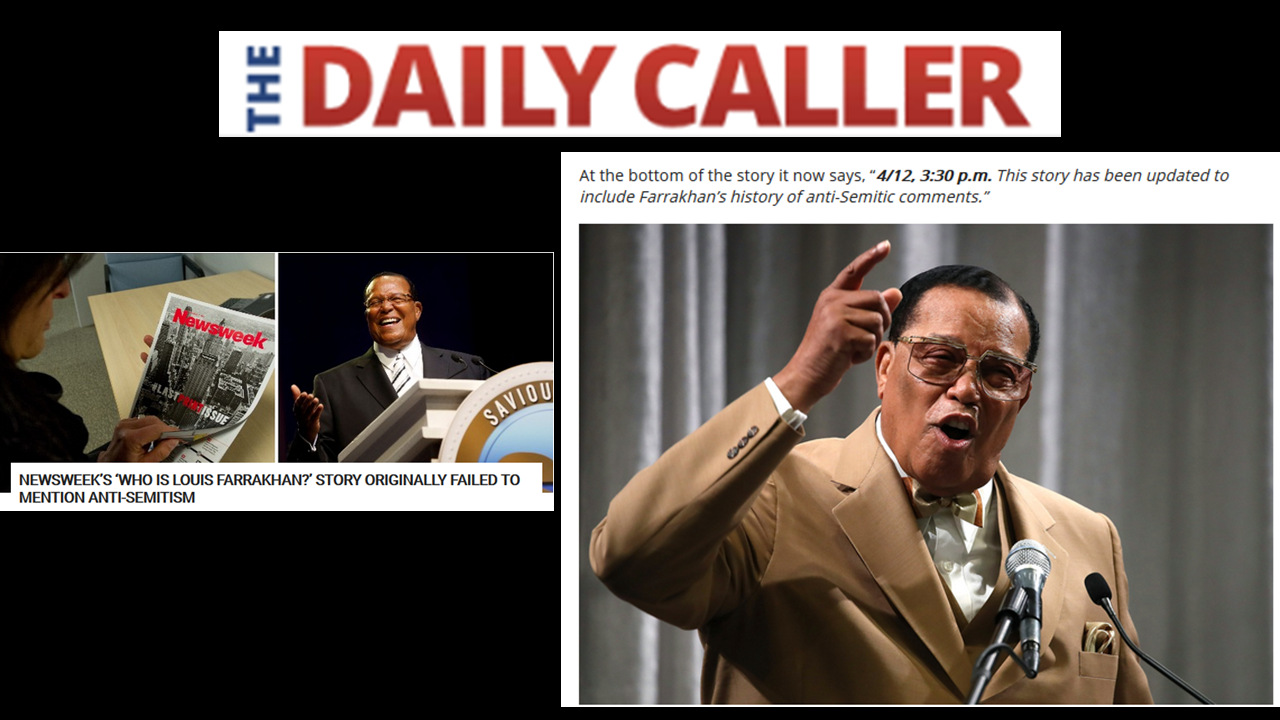 Mr. Rosenzweig closes his article with the following words:

“one thing for sure, somebody has to publicly stand up against Farrakhan and shame him dramatically in front of millions. Making a fool out of him is the first step, yet in all these years, nobody has done so. Is it out of fear? Perhaps.”

Minister Farrakhan has been calling for a public showdown for decades, most recently in November 2018. He has challenged the US Congress as well as the Leaders of Jewish organizations to a public debate to prove their false accusations against him. He has even offered his life if they can prove one word of what he teaches from the Honorable Elijah Muhammad as false. No one has even attempted to answer this challenge, you are right about one thing Mr. Rosenzweig it is fear. The wickedly wise know who the Minister is and that the truth he speaks cannot be defeated, so they will never accept the challenge.

Finally Minister Farrakhan’s work testifies to his identity, he is fulfilling what is written in the scriptures. His controversy with those who say they are Jews and are not, serve as further witness to this identity and  Mr. Rosenzweig’s disrespectful reference to Minister Farrakhan (Allah’s Servant) as human waste,  lines up with what is written in the Talmud: that Jesus is in hell boiling in excrement. So thank you for writing that Mr.Rosenweig.  Your snide and insulting words against Minister Farrakhan today reveal your dark heart and degenerate mind.  And it shows the world that Minister Farrakhan’s enemies today are the same as Jesus’ enemies yesterday.  Thanks for helping us to prove the Minister’s divine identity.

Keith Muhammad is the local representative of the Honorable Minister Louis Farrakhan and Student Minister of the Nation of Islam Mosque in Chester, Pennsylvania