BLACK PANTHER PIONEER ELAINE BROWN: “An attack on Farrakhan is an attack on all of us” 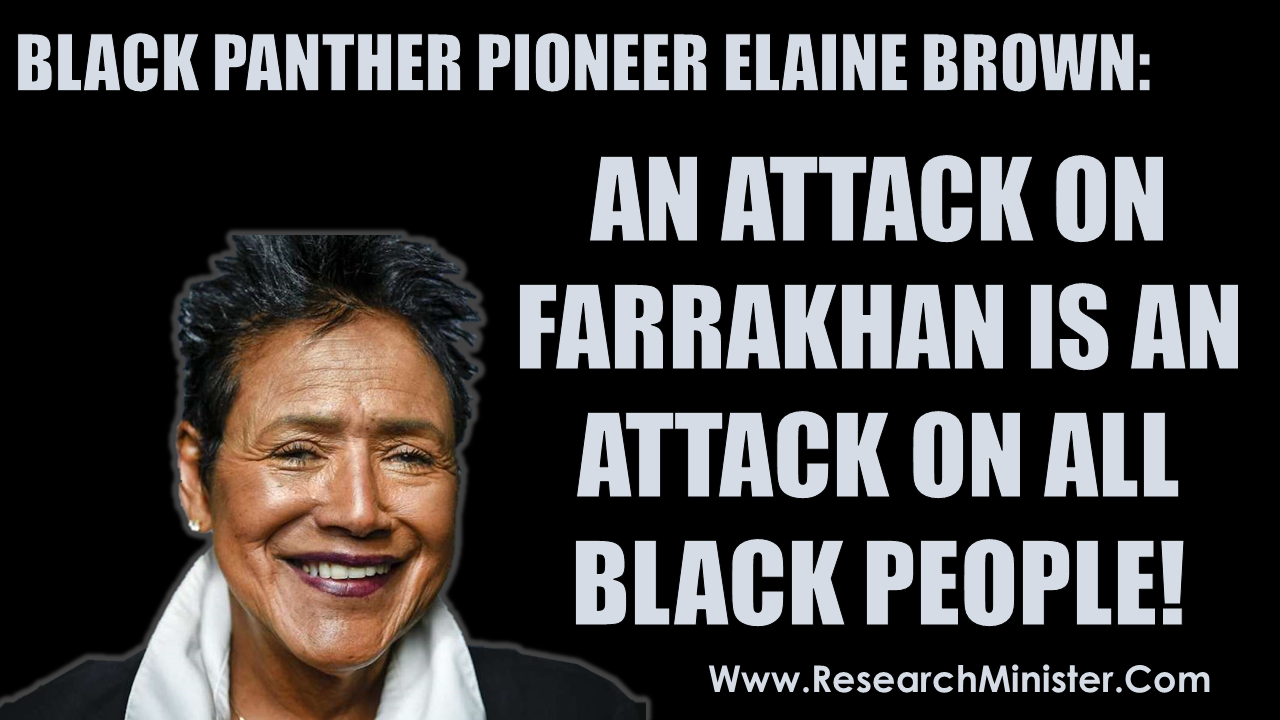 Black Panther Pioneer and Legend Sister Elaine Brown speaks strong words at a recent forum in San Francisco, California.  Student Minister Christopher and Student Minister Keith Muhammad organized a Bay Area group of concerned citizens to speak out against the unfair and destructive propaganda that has slandered the noble name and reputation of Black America’s most ardent and courageous leader-the Honorable Minister Louis Farrakhan.  Sister Elaine’s words are presented below for the benefit of the ResearchMinister.Com subscribers.

“Minister Farrakhan resurrected the Nation of Islam and became and remains the last Black Leader we have. I know that most of my friends who were leaders and comrades are in the grave.  Minister Farrakhan, by the resurrection of the Nation of Islam he put himself in danger, because he began to organize Black people to be self-sufficient and to fight against an enemy that would keep us oppressed. And the Nation became our last organizational effort to hold on to the freedom struggle. 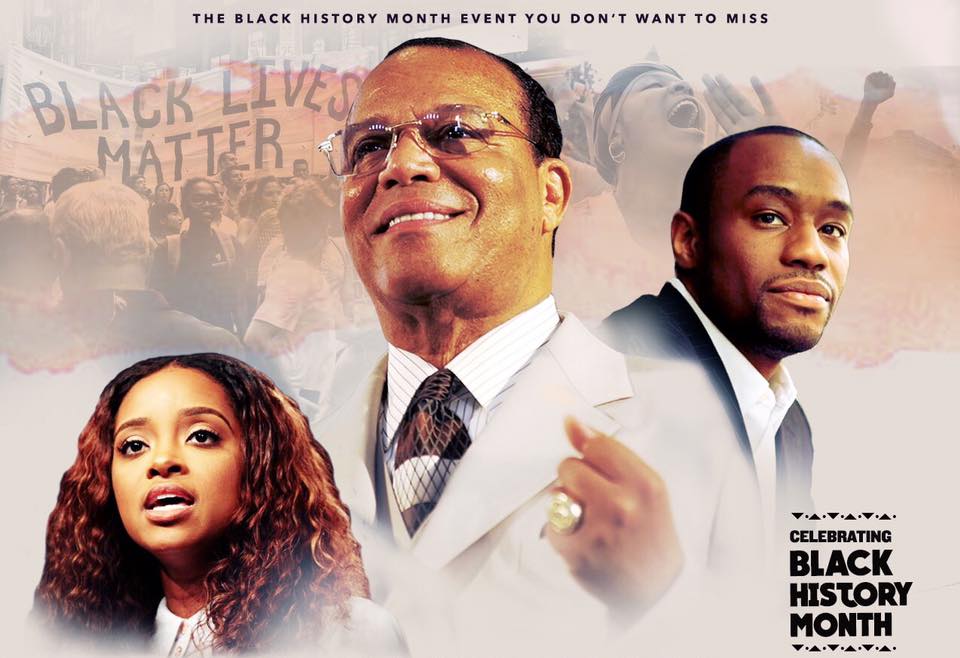 Now when some Negro has a problem, what does he do? He becomes a black man and calls on the Nation, “can you help me, I’m black?”  They all up in it and then, suddenly, they get caught with their hand in the till or something, they run to Minister Farrakhan, “I’m really a black man. Even though I don’t look like one or act like one.” And the Nation comes to see about him, anyway, right? We always to look to the Nation to come and see about us; and whenever the police start shooting, people don’t just say, “Hands up!” They go run to the Nation, like they did in the case of Oscar Grant. Right?

Indeed, I would assert that every Black political office here in the Bay area, but especially here in Oakland, got there from the blood of the Panthers. Don’t sit up here and act like you don’t know that. Well, now, we’ve got some elected people, Louis Farrakhan trying to hold on and create an organization that will continually and consistently fight for our freedom. 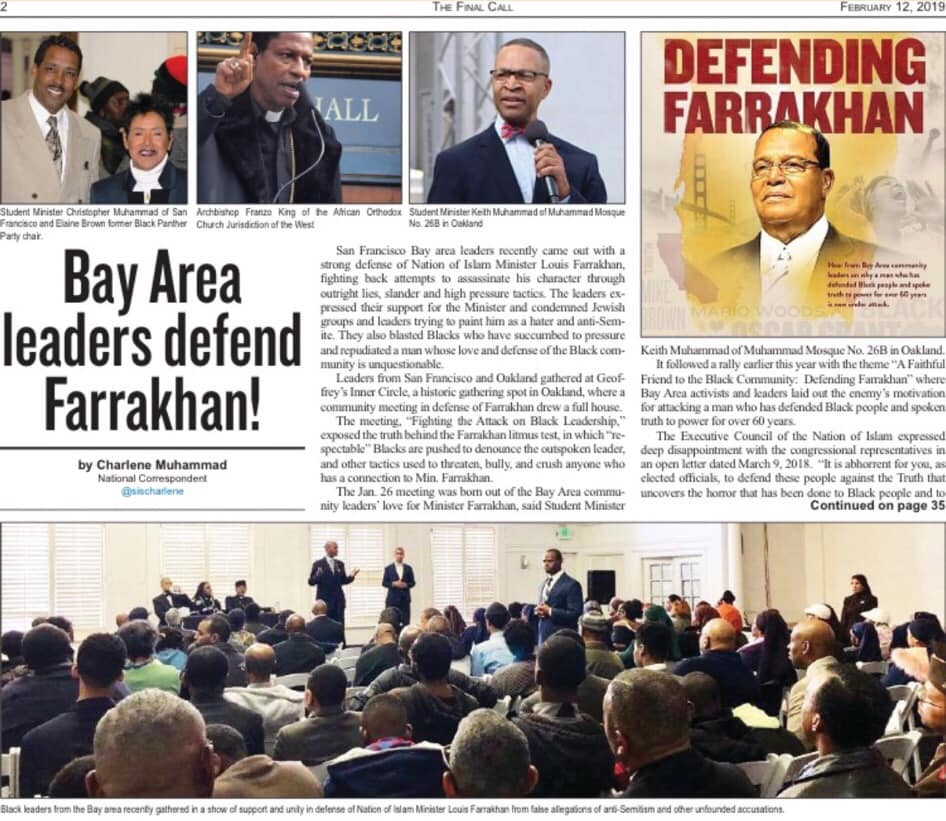 Then, uh-oh, as the Negro rises again. Here it comes. Self-proclaimed elected Negroes would now assault our last Black leader we have, the Honorable Minister Louis Farrakhan. Now, they’re not assaulting him for not being true to Black people. They are not saying, “Wait a minute, you lost the faith or something.” They’re not assaulting him for not standing up for our people. No, they want to denounce Minister Farrakhan as anti-Semitic. Now, I’m trying to figure out what the hell this has to do with the Negro? You don’t own no rights and ain’t got no land in Israel. How did you get in the conversation, not to count the fact that Jews are not the only Semites.  That discussion, I can’t get to deep into right now because I want to stay on point, but the point is this – with all the suffering that black people continue to endure, self-proclaimed Negroes elected leaders have turned on the last Black man standing, in defense of Jews.

What about “Mass incarceration”. They ain’t, said nothing really, not even about police murders of Black people. They ain’t even spoke out against that. They have done nothing at all about the CIA dumping all that cocaine into the Black community. And more recently, and more relevantly and more importantly, they have been silent on the crimes of the Zionist state of Israel. Ain’t nobody saying Netanyahu is a problem, as he continues to murder Palestinians. Palestinians are our allies, our friends. They’re our people. They ain’t said a mumbling word about the European Zionist Jews that run the state of Israel and what they have done to get the State of Israel. Jewish gangs… for example, that was headed by the father of Rahm Emmanuel, who’s now mayor of Chicago and the former chief of staff for Obama. They ain’t said a mumbling word about that. They ain’t said nothing about how they murdered all these Palestinians to create this state of Israel. Nothing about the ongoing murders and the use of nuclear weapons and the arsenal of nuclear weapons that Netanyahu and the boys have right now. 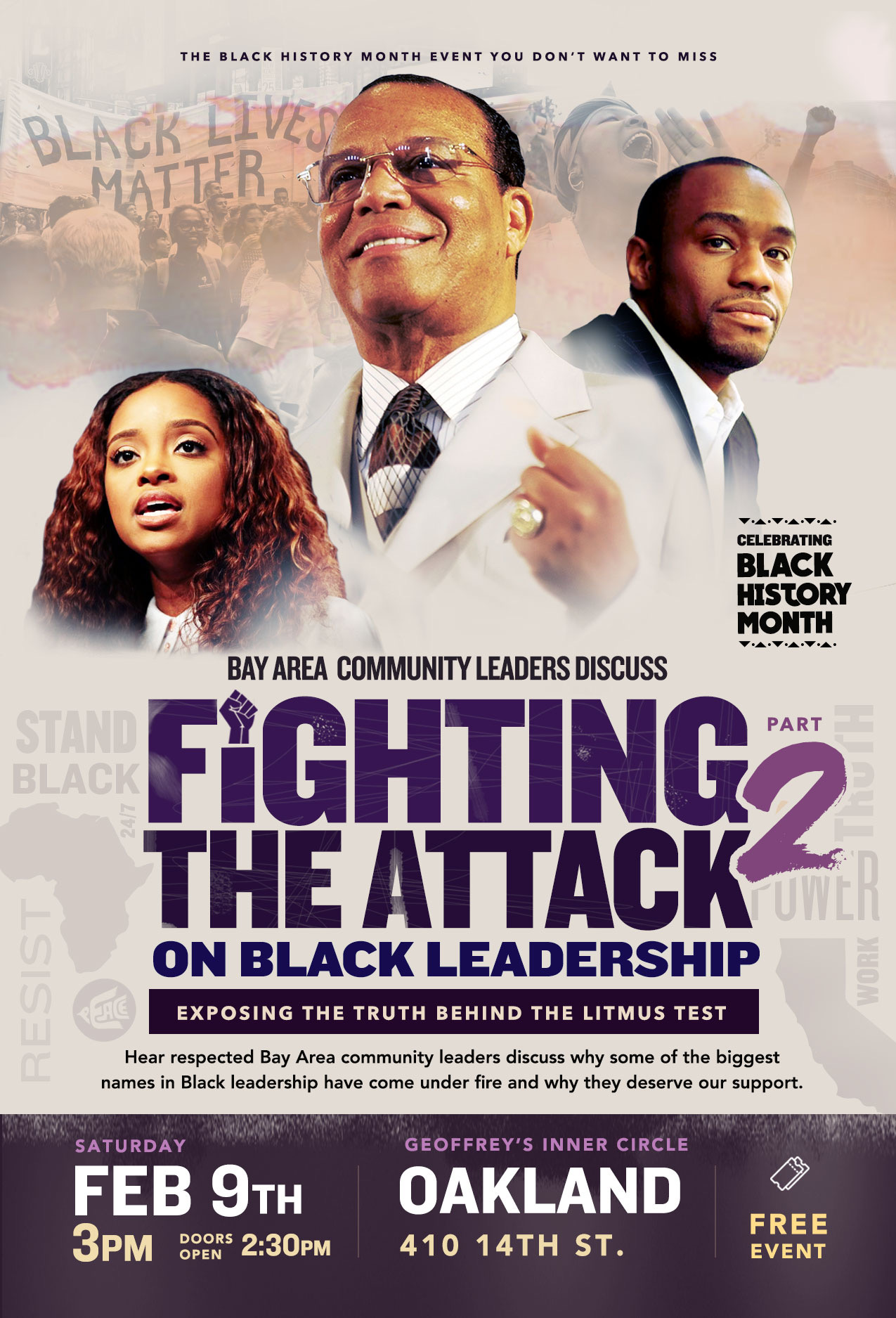 But these Negroes have suddenly found a voice to speak against the Honorable Minister Louis Farrakhan. I’m trying to understand why they’re still here in office. I’m getting to the end. I said that, now, we look at Minister Farrakhan and on the question of the Jew, I don’t know any Jews that Minister Farrakhan has killed. I don’t know about no agenda  for mass extinction of the Jews, when there’s a mass extinction of Palestinians in Palestine. I don’t know of any of this, all I know is Louis Farrakhan has been consistently, I would say, for more than a half a century, standing up for Black people

Now these Negroes who sit up near master have to be checked. You can’t just sit here and think it’s alright, because we’ve got to always root out the bad apples, which is the nice way of my saying it, in the interest of saying it around my friends from the Nation because they know I never curse in front of them.

Now, back in the day the Black Panther Party had a theory that we called the greater fear. Greater fear. And Huey P Newton said listen, “We have to institute a thing in the community called the greater fear. You want to go and collaborate with the police because you’re afraid. You’re afraid they ain’t going to give you some money; send you to jail; they’re  talking about maybe they won’t give you your car note or whatever your little thing is, some kind of fear that you may have. Now, what we have is the greater fear. You’re  going to want somebody to go come along for you, because  if you think you gonna go over there and collaborate with the police, remember we’re here as the greater fear. Is it okay for you to be all up in this, talking about Louis Farrakhan and you just feel like that’s okay? It’s not okay!  And we got to bring the greater fear into this program. And we always – we want a job and sometimes – Minister Keith Muhammad taught me – we don’t even want anything from the master, we just want to be near master. And worse than that, some  don’t even want to be near, but  just want the promise of nearness. “I just want to be in the house or outside the house, the door might open and you let me sit at your table.” Because it is his table. So our message to the Negro…our message to the Negro’s who would have fought our last Black leader, you will have to change or face the wrath of the youth. You going to walk with us as a strong wall or you’re going to face the wrath of the people and any attack against Louis Farrakhan is an attack on our people.”