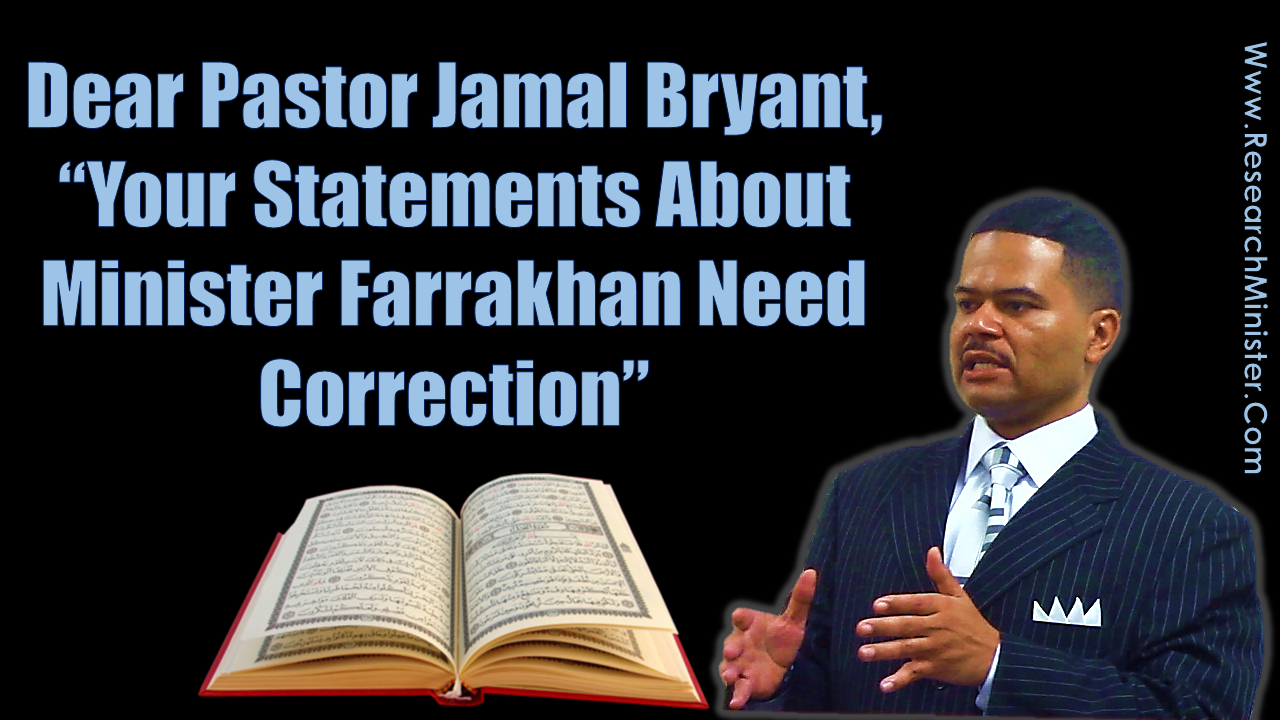 Pastor Jamal Bryant published an interview with Princeton Seminary Pastor Dharius Daniels today via YouTube.  It contained unacceptable errors concerning his past experiences with Minister Farrakhan and the Nation of Islam.  Brother Demetric Muhammad has penned an open letter to Pastor Bryant addressing the parts of his interview that are factually in error and as such, merit correction based upon the facts.

My dear and beloved brother, I am writing to you as a brother and as someone who has a great deal of respect for you and the work you have done as a great pastor and one who has never shied away from being an advocate of the Black community. I have, over the years, appreciated your “avant garde”, “outside of the box” style and approach to the ministry.  And I have rooted for you, from a far, as you had to endure public and personal trials and obstacles as you grew and evolved.  And I have watched you and thought to myself, “if that brother continues to grow and evolve, he will one day be a giant for the church and a giant for our people.”

I want you to know that I am a student of the Honorable Minister Louis Farrakhan.  I am one of many.

The purpose for this letter is to express my disapproval and disagreement with your words regarding the Honorable Minister Louis Farrakhan that I watched today via a YouTube video.

So, I write this open letter publicly to correct the record regarding false statements that you have publicly shared via your YouTube video.  I sincerely pray that you will seriously consider what I am sharing with you and do 2 things.  First, search your own heart and mind for why you erred in such a way, and if there are deeper spiritual root causes that may need tending to, then do what is needed to self-correct.  Secondly, offer a public retraction of your statements and offer sincere apology to Minister Farrakhan and the Nation of Islam.  The Minister has been your brother and a faithful elder to you.  And you have received brotherhood and solidarity from his community of students and followers.  Our kind and respectful past relationships prove this is the minimum of what we are owed as a result of your public offense.

I would like to add that when the statistics were tallied for the original Million Man March in 1995; it showed that 80% of the men who participated, self-identified as being a part of the Christian faith.  Now, I remember reading the Bible and Jesus says in the New Testament that ‘my sheep know my voice, another they will not follow’.  This is relevant because it powerfully suggests that those 80% Christian men, heard the voice of Jesus coming through the Honorable Minister Louis Farrakhan.  And they answered Christ’s call coming through Minister Farrakhan, to be present at an occasion where they could receive inspiration, motivation, encouragement, exhortation and love so that they could grow and develop along the Christ-like ideals of fatherhood, husbandry, brotherhood and citizenship.  And they were all positively impacted, and they left the Million Man March to positively impact their families and communities.

I thought it quite self-serving my brother, for you to speak as though Minister Farrakhan has a fear of your preaching ability.  My dear brother, if that is what you think, then perish the thought!

Think with me, you were an introductory speaker at an event with hundreds of thousands of people present to hear as a keynote speaker, the Honorable Minister Louis Farrakhan.  REPEAT. You, my brother, were a bit player in a production that the Minister was the producer of.  I work with young people and they have a saying “get your weight up.”  Such a colloquialism is fitting here to say to you dear brother, for perhaps when you call for a million men and nearly 2 million show up, then we can have a conversation where you are mentioned as being on the same level as our beloved Minister Farrakhan.

You are not Minister Farrakhan’s peer.  You are not on his level.  I really hate to state the obvious, but I feel I must in the face of such folly.

You also stated that Minister Farrakhan is afraid to allow a preacher to speak at Mosque Maryam out of fear of losing his followers to Christianity.  This is foolish for you to say such.  There have been many pastors who have spoken at the rostrum at Mosque Maryam.  The great Rev. Dr. Hycel B. Taylor, delivered the keynote address on June 13, 1993.  He was introduced by Minister Farrakhan.  Minister Farrakhan is never fearful of men and women of faith.  And his many years of service to the Black community has simultaneously been many years of service to the Black church. 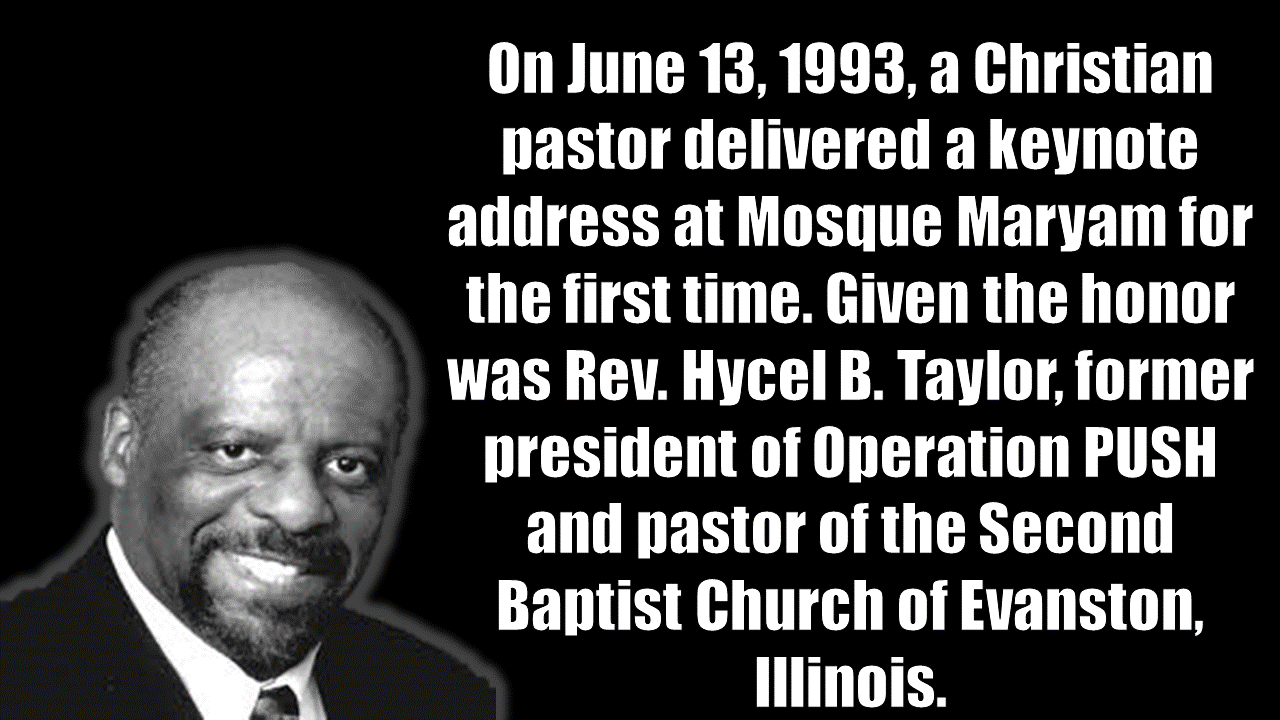 In fact, since you invoked the Million Man March, let me remind you of how ecumenical and interfaith Minister Farrakhan is by citing a portion of his words on that day, to the nearly 2 million men who came to answer his clarion call.

“Now, brothers, moral and spiritual renewal is a necessity. Every one of you must go back home and join some church, synagogue, temple or mosque that is teaching spiritual and moral uplift. I want you, brothers, there’s no men in the church, in the mosque.  The men are in the streets and we got to get back to the houses of God. But preachers, we have to revive religion in America.  We have to revive the houses of God that they’re not personal thiefdoms of those of us who are their preachers and pastors. But we got to be more like Jesus, more like Mohammed, more like Moses and become servants of the people in fulfilling their needs.”

Minister Farrakhan would never say this if he  has fears or concerns  about folks who come to follow him going to join the church.?  That is ludicrous.  At the largest audience that he ever taught, he could have directed all of those men to join the Nation of Islam.  But he didn’t.  The average preacher may have done such.  But not Minister Farrakhan, his heart and mind is bigger than what we see of the all to frequent, petty small mindedness of “religious gang banging.” 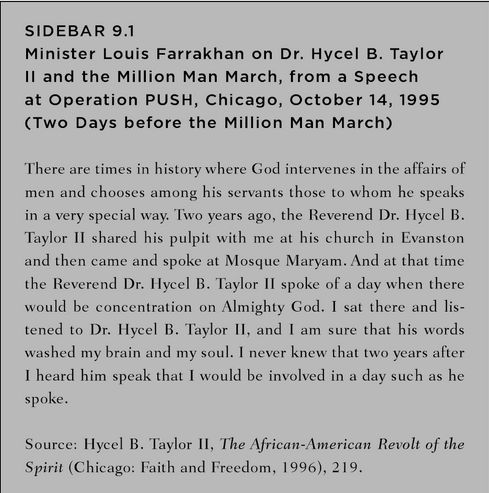 You should also know that through Minister Farrakhan’s ministry, the Black church and the Black mosque have formed a “Jesus-centered” solidarity that is one of the most powerful and significant phenomenons to consider as it relates to the future of America.  Because it indicates that the future of America, especially the Black community, is “Christo-Muslim” and not “Judeo-Christian.”  This has frightenend Minister Farrakhan’s enemies.  And those of us in the Nation of Islam under Minister Farrakhan’s example have learned that the common thread that traverses the sacred texts of Jews,Christians and Muslim-the Abrahamic faiths-is an emphasis on religious orthopraxy and not orthodoxy.  From this understanding, we understand that a true Christian and a true Muslim have the same character, ethics, principles and discipline.  Doctrines, creeds, dogmas, rituals and terminology obviously differ.  But these are the metrics of religious orthodoxy.  Religious orthopraxy emphasizes the correct deeds, actions, behavior, conduct and life-style.  And through a re-focus from the divisive nature of religious orthodoxy to the unifying ability of religious orthopraxy a growing unity has begun.

Lastly, your words present a great object lesson around the subject about which you were educating your interviewer.  You were trying to explain to him discernment.  But, with all due respect dear brother, you were extending to that young man a rather secular application of discernment.  Again, I am a student and as I study discernment I understand that it is one of the spiritual gifts promised to the believers.  And spiritual discernment is not focused on having an awareness of what is appropriate in this or that specific situation as you described to your interviewer.

Spiritual discernment is about discerning and recognizing the presence of God in all affairs.  This is the highest manifestation and purpose for the spiritual gift of discernment.  I heard my teacher, the Hon. Min. Louis Farrakhan teach one day that those who submit to God and those who make obedience to God a habit and way of life ultimately are blessed to know God in a very special kind of way.  He said they develop the sensitivity to discern God’s presence in a “hint or sign.”  These are believers who through obedience, grow to increase their spiritual sensitivity.  And this causes them to be able to see the hand of God in all affairs.

I wish this for you my dear brother.  Because your current views about Minister Farrakhan suggest that you have not discerned that God’s spirit is with him, on him and operates through him for the good of all who listen to him.  Minister Farrakhan is my teacher, and I bear witness that he is anointed by God.  Much qualitative and quantitative data proves this.

But I close with your own words from when you hosted Minister Farrakhan on your WORD Network program.  It was a moment that made all of us who love Minister Farrakhan proud of you.  But your words today have made us disappointed in you.  We invite you to atone. 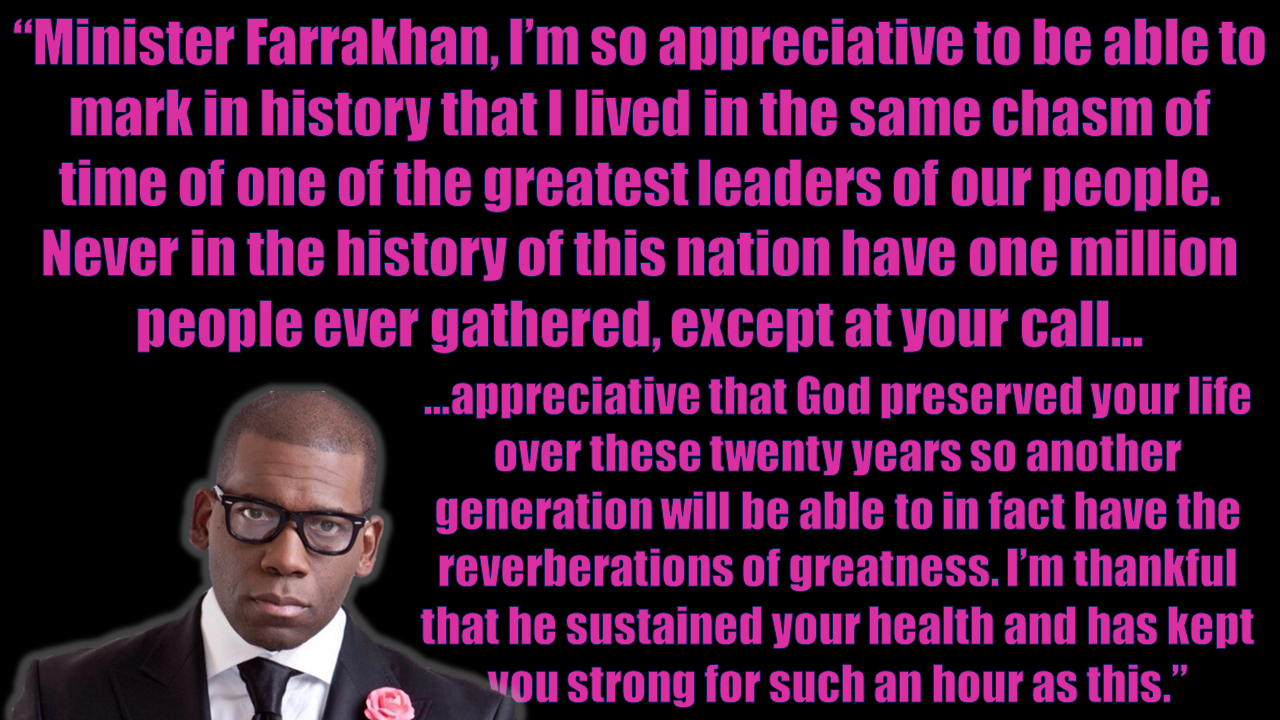