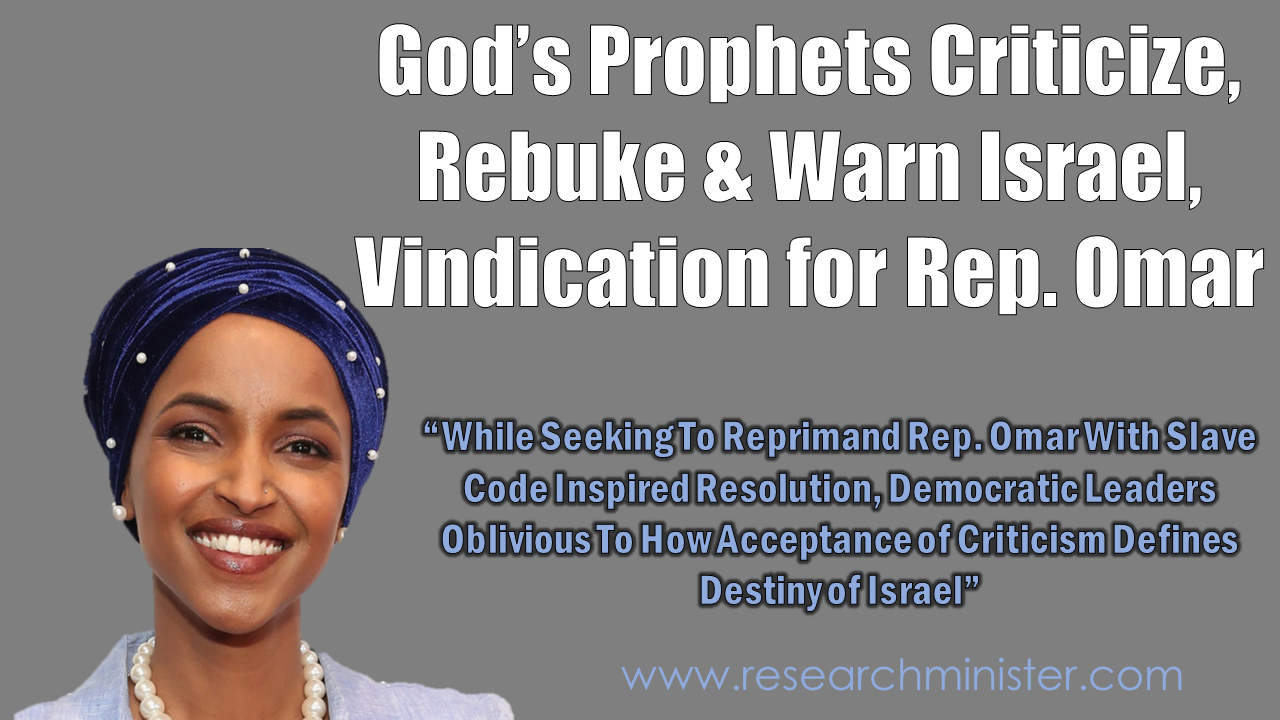 While Minnesota Rep. Ilhan Omar is being vilified in the halls of Congress for statements that are critical of the Israeli lobby’s control and influence over the American government, I am reminded of how the subject of Israel is both a religious and political subject of importance and modern relevance.

House majority leader Rep. Nancy Pelosi rushed to appease the Israeli lobby by pushing through the often laborious process required to bring a resolution or bill up for a vote; she speedily forced the resolution through to condemn “anti-semitism”; and after public pressure modified it to include a condemnation of so called other forms of bigotry.  And this all stemming from newly elected congresswoman Ilhan Omar’s (D-MN) criticism of the power and influence of groups like AIPAC.

And while I have witnessed numerous articles written that have taken up either side of this issue, I have yet to see anyone discuss a fundamental flaw in the insistence that Israel and the Jewish people should be beyond criticism, and that all criticism of Israel must be de facto “anti-Semitism.”

The flaw is that in order for the claim of the chosen people of God to be maintained; the conditions set forth to define and describe the chosen people must be met.  The primary description and definition can be found in the Bible; specifically the Old Testament or Torah.

According to numerous references in the Old Testament, Israel was a people that frequently disobeyed God and suffered painful consequences.  And God, out of His love for this people, would send apostles or prophets to instruct them, warn them, rebuke them, criticize them and otherwise spell out the conditions upon which they might return to the favor of God.

The work of God’s prophets to Israel was primarily to criticize their bad behavior.  And since Israel’s relationship with God stems from their experience with God’s prophets, then we maintain that receiving and properly responding to criticism and rebuke is at the heart of what true Jewishness is all about.  And those who refuse to be open to criticism are in violation of the conditions set forth in scripture that make the status of “chosen people” dependent upon receiving and accepting criticism and rebuke.

Consider the following notes from the field of religious studies as it relates to the prophets’ role and function as critics:

“The prophets boldly rebuked vice, denounced political corruption, oppression, idolatry and moral degeneracy. They were preachers of righteousness, reformers, and revivalists of spiritual religion, as well as prophets of future judgment or blessing. They were raised up in times of crisis to instruct, rebuke, comfort and warn ISREAL, the nations, and the messianic kingdom.” (Freeman, Intro. to Old Testament Prophets , p. 14.)

Prophets arose in Israel …challenged the people in power—the political rulers and the economic elite. Not all the prophets were anti-establishment, however. For example, Nathan was King David’s prophet, and he was financially supported by the king. But most of the prophets criticized the direction in which the people were being led by their rulers, and this often got them into trouble. They were met with hostility, ridicule, mistreatment, punishment, and exile. The prophetic message varied with the circumstances. When things were going well, the prophets warned the people about impending doom if they did not change their ways. When things were going badly, they supported the people with words of encouragement and hope. (https://www.loyolapress.com/our-catholic-faith/scripture-and-tradition/scripture/prophets-in-israel?p=1)

A sample of the strong and bold criticisms of God’s Prophets is below.  Israel’s future destiny with God depended upon their acceptance of this divine criticism.  They were supposed to accept the rebuke of the Prophets as being the rebuke of God Himself.  And to  demonstrate their acceptance  they were expected to perform the required behavior modifications called for in the Prophets’ stinging rebuke and come into alignment with God’s laws of moral rectitude.:

“Ah, sinful nation, a people laden with iniquity, offspring of evildoers, children who deal corruptly! They have forsaken the LORD, they have despised the Holy One of Israel.” (Isaiah 1:4)

“Their works are works of iniquity, and deeds of violence are in their hands.  Their feet run to evil, and they are swift to shed innocent blood; their thoughts are thoughts of iniquity; desolation and destruction are in their highways.” (Isaiah 59:3-6)

“The way of peace they do not know, and there is no justice in their paths; they have made their roads crooked; no one who treads on them knows peace.” (Isaiah 59:8)

“For the people of Israel have forsaken your covenant, thrown down your altars, and killed your prophets with the sword.” (1Kings 19:10)

“Now when the Israelites cried out to the LORD because of Midian, He sent them a prophet who said, “This is what the LORD God of Israel says: I brought you up out of Egypt, out of the house of slavery. I delivered you out of the hands of Egypt and all your oppressors. I drove them out before you and gave you their land. And I said to you: ‘I am the LORD your God. You must not worship the gods of the Amorites, in whose land you dwell.’ But you did not obey Me.” (Judges 6:7-10)

“You admonished them to turn back to Your law, but they were arrogant and disobeyed Your commandments. They sinned against Your ordinances, by which a man will live if he practices them. They stubbornly shrugged their shoulders; they stiffened their necks and would not obey.” (Nehemiah 9:29)

“They served idols, although the LORD had told them, “You shall not do this thing.” Yet through all His prophets and seers, the LORD warned Israel and Judah, saying, “Turn from your wicked ways and keep My commandments and statutes, according to the entire Law that I commanded your fathers and delivered to you through My servants the prophets.”  But they would not listen, and they stiffened their necks like their fathers, who did not believe the LORD their God.” (2Kings 17: 12-15) 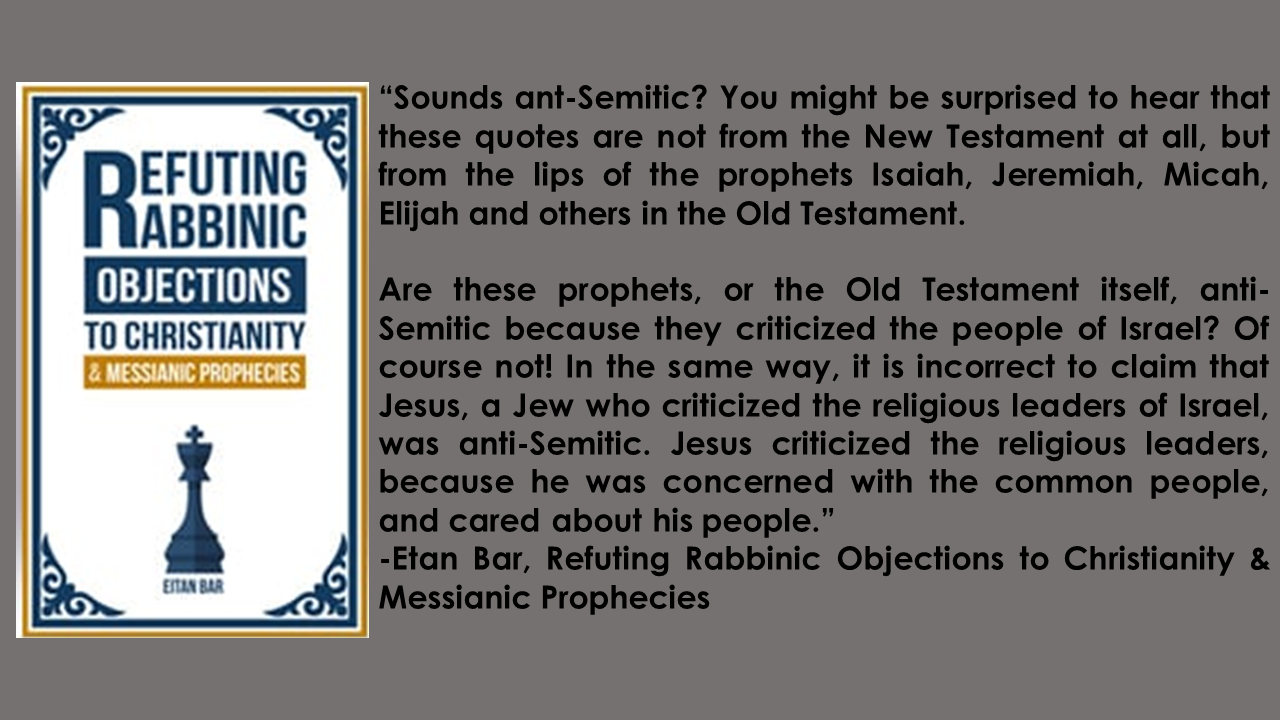 Another over looked historical fact in the rush to condemn Rep. Omar is the nefarious legacy of the slave codes.  I was introduced to the slave codes by studying the writings of the Most Honorable Elijah Muhammad.  He cited the book written by William Goodell entitled The American Slave Code.  This fascinating book exposes how the behaviors and practices that Black people are condemned for not displaying in impoverished communities today, began as practices and behaviors that Black people wanted to display but were deemed a threat to the white social order, and as such, were outlawed within the American legal system.  In an article entitled Separation or Death Part V, The Most Honorable Elijah Muhammad writes:

“According to the American Slave Code of Law, by William Goodell—page 304, under the above title, the Negroes may be used as breeders, prostitutes, concubines, pimps, tapsters, attendants at the gaming table and as subjects of medical and surgical experiments for the benefit of science.” 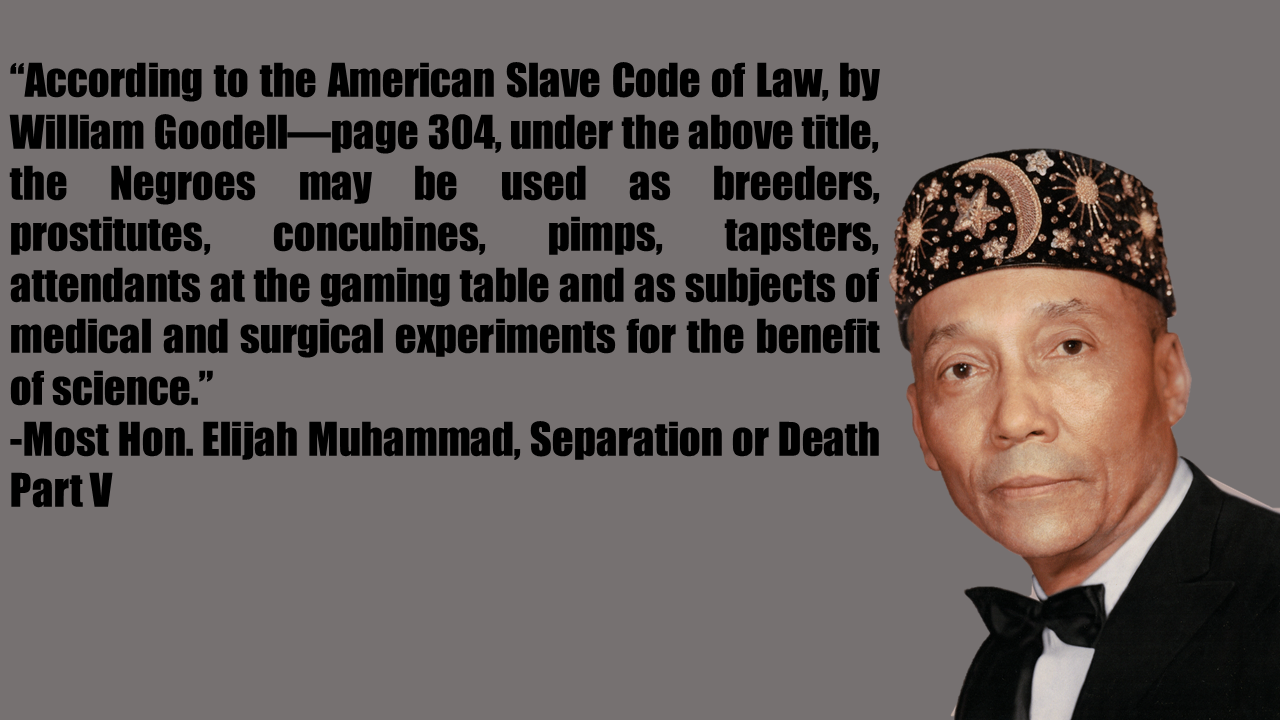 Moreover, the Slave Code is really the inspiration for what is being done today in the case of the U.S. House of Representatives reaction to Rep. Ilhan Omar’s statements about the enormous influence of the Israeli Lobby.  Rep. Omar should be free to express her own conscience.  She should be free to speak what she thinks and understands.  Her thoughts, views and opinions should not have to agree with the ruling class of white people who have taken a pro-Israel political position.  After all, Rep. Omar is not a slave.

Yet, there is a desire to punish her like she is a disobedient slave who has dared to think for herself and form her own thoughts and opinions.  This kind of bold independence has always been seen as an affront to the ruling class of whites.  And they let it be known in the their legally binding slave code laws.  From The American Slave Code by William Goodell we learned the following:

“But we waive and pass by all this, for the present, to affirm distinctly that “the legal relation” of slave ownership, in America, as defined by the code that upholds it, is a relation that cannot and does not consist with the recognition (either in theory or practice) of the intellectual and religious RIGHTS of the slave.

The slave “is a chattel.” But chattels have no literary or religious rights. He is a chattel “to all intents, constructions, and purposes whatsoever.” He/she is “in the power of a master, to whom he belongs”-“entirely subject to the will of his master“-“not ranked among sentient(able to think and feel) beings, but among things.”

…The American Slave Code, from beginning to end, knows no rights of conscience in its subjects. The master is to be implicitly obeyed. His will is to be law. The slave is allowed no self-direction…The slave master may withhold education and the Bible; he may forbid religious instruction, and access to public worship. He may enforce upon the slave and his family a religious worship and a religious teaching which he/she (the slave) disapproves. In all this, as completely as in secular matters, he is “entirely subject to the will of a master, to whom he belongs.” The claim of chattelhood extends to the soul as well as to the body, for the body cannot be otherwise held and controlled.  There is no other religious despotism on the face of the earth so absolute, so irresponsible, so soul-crushing as this.”

Rep. Omar, like Tamika Mallory and many other courageous women are being called by God to rise today and speak uncomfortable truths to the most powerful forces in the world.  They represent true women’s liberation; a liberation that is a part of and is permanently tied to the liberation of the oppressed people’s of the world, whom God Himself has declared that today is the time of their(our) rising.  I salute her courage and willingness to do as the Holy Qur’an admonishes all believers to do in traveling the “uphill road.”  The “uphill road” as described in Surah 90 of the Holy Qur’an involves the freeing of slaves.  We pray that Rep. Omar can ultimately be a divine instrument of Allah (God), that He will use to free the U.S. Congress from the enslavement to the Israeli Lobby.