Mockery No More! Elijah Muhammad’s MotherPlane And The Secrets of God 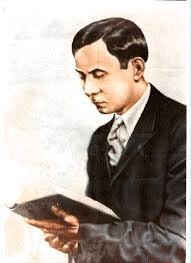 In 1862, Wallis Willis wrote a song entitled “Swing Low, Sweet Chariot.”  In 1930 Master Wallace Fard Muhammad began teaching Black people in Detroit Michigan a unique form of Islam called Supreme Wisdom.  A part of this unique and popular message was his identifying for his chief student Elijah Muhammad, a “dreadful looking plane” in the sky.  The English word ‘chariot’ in the title of Wallis Willis song “Swing Low Sweet Chariot” is a direct reference to the Hebrew word merkabah found in the Bible’s passages that describe Ezekiel’s vision of a wheel within a wheel in the sky.  Master Wallace Fard Muhammad taught Elijah Muhammad that the “dreadful looking plane” in the sky was the prophecy of Ezekiel’s wheel coming into fulfillment.

teaching and what was hoped for in the collective yearnings of the enslaved Africans in America.  Wallis Willis’ song has become one of the best known and most popular of the Negro Spiritual Hymns and  is part of a musical legacy of freedom songs.  These musical expressions artistically translated what we now understand to be the deeply held desire and expectation among the slaves for liberation by means of divine intervention.

It is imperative that this relationship be made known due to the chronic condition of Black suffering in America.  There are profound solutions that can end that suffering found within the teachings of the Most Honorable Elijah Muhammad.  But many people are discouraged from finding value in the Most Honorable Elijah Muhammad because he has been so badly mocked and scorned.  However, when the light of history, scripture, science and religion is shed on his revolutionary teachings, it becomes clear that what he provides is the answer to our ancestors prayers for liberation through divine intervention.

When what the Honorable Elijah Muhammad teaches about Ezekiel’s wheel is proved true, it will powerfully suggest to those who have mocked him, that all of his teachings are true.  This will mean that instead of being mocked, Muhammad should be honored and his wisdom submitted to.  This is because his teaching in this area is so strange and controversial that the likelihood that he would be correct about such an unusual subject and suffer inaccuracies elsewhere is unfathomable!

Students of religion are familiar with the way the message of the Biblical and Qur’anic prophets were considered by their contemporaries to be controversial.  In fact, the Prophets of old were often labeled as “m 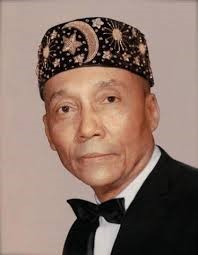 ad” men and their message was rejected by the tribal chiefs and leaders of the people as being false and borne of their own designs.  But both the Bible and Holy Qur’an helps us to grasp better why the Prophets and Messengers of Allah (God) were characterized in such a way.  Both the books of scripture explain that what the Prophets and Messengers taught and what the people were ultimately rejecting were truths that had always been known by God but, He had kept such knowledge a secret until the appropriate time for its revealing.  Consider the following passages of scripture.

“Surely the Lord GOD will do nothing, unless He reveals His secret unto his servants the prophets.”   Amos 3:7

“The Knower of the unseen, so He makes His secrets known to none except a messenger whom He chooses.” Holy Qur’an 72:26-27

These scriptures point to an important but often overlooked factor in judging the veracity of what the Honorable Elijah Muhammad and the Honorable Minister Louis Farrakhan teach as the truth.  These verses suggest that the very teachings that are considered so controversial may be deemed so because they are secrets from God.  Normal reactions to the hearing of a secret are surprise, shock, disbelief, wonder and even denial.  But none of these natural human reactions to the hearing of a secret is reason to conclude that the secret is untrue. 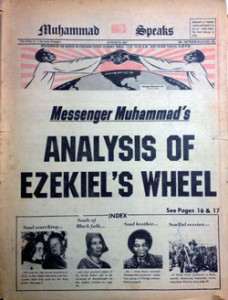 In order for secrets to be made known they must be revealed, hence the term revelation is used to describe newly disclosed secrets from God.  And as that message is preached, taught and spread by God’s Prophet or Messenger, it is often considered to be strange. And it is the strangeness of the prophets’ preaching that causes him to be mocked and ridiculed.  But British author, Lord Gordon George Byron observed that “truth is indeed stranger than fiction.” Byron’s observations perfectly describe the strange sounding truth of the Honorable Elijah Muhammad’s teaching on the subject of Ezekiel’s Wheel. The Collins Dictionary of the English Language defines the word strange as an adjective meaning something that is “odd, unusual or extraordinary in appearance, effect or manner; peculiar, not known, seen or experienced before; unfamiliar; not easily explained.” The strange message of the Honorable Elijah Muhammad which previous generations found it difficult to explain is in fact the full disclosure and revealing of the unusual, extraordinary, peculiar and previously unknown secrets of God. 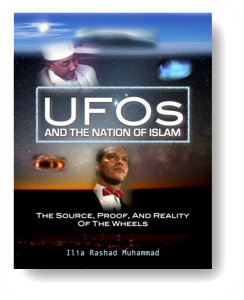 Proving that Muhammad’s controversial teaching on Ezekiel’s Wheel is in fact a part of the secrets revealed to Him by Allah (God) is the subject of a new book that debuted September 17th of this year.   The Mother Plane or Mother Wheel as it is described in the teachings of the Most Honorable Elijah Muhammad is the subject taken up by one of the students of the Honorable Minister Louis Farrakhan.  Ilia Rashad Muhammad in his book UFOs and The Nation of Islam: The Source, Proof and Reality of The Wheels goes further than any other author in using government records, religious history, science and eyewitness testimony to end the season of mockery and disrespect aimed at discrediting the Most Honorable Elijah Muhammad who was once referred to by Reader’s Digest as ‘the most powerful Black man in America.’

Ilia Rashad does an excellent job in exemplifying what has been a defining feature in the ministry of the Honorable Minister Louis Farrakhan which is the unpacking and elucidation of the message of the Most Honorable Elijah Muhammad by means that are universally accepted in academic circles and among religious scholars as well.

He makes us to see the connection and relevance between the ancient scriptures and the modern phenomenon of UFOs.  Those in the Black community today, who like the slaves of yesterday, yearn for liberation via divine intervention will find comfort in Ilia Rashad’s elucidation of Muhammad’s Mother Plane message.

Ilia Rashad demonstrates in his book that all of the Abrahamic faiths contain beliefs and teachings regarding an aerial vehicle that is the dwelling place of God; a special vehicle that He uses in the ultimate liberation plan of the prophetic Children of Israel. In UFOs and The Nation of Islam: The Source, Proof, and Reality of the Wheels, we learn that even the characteristic omnipresence of God is facilitated through what the Bible symbolically describes as clouds, pillars of fire, wheels and thrones.  The scriptures descriptions of these vehicles coincide with what has been witnessed by millions of people throughout the earth and classified as Unidentified Flying Objects or UFOs.

Moreover, Rashad’s narrative helps to place the NOI teachings within the field of religious studies so that it might be fairly analyzed alongside similar beliefs as found in other faith traditions.  And this is a critical accomplishment that helps to end the mockery that Muslims, Christians, and Jews have used against the NOI.  Religious adherents of these faiths will learn that they cannot mock Muhammad without at the same time mocking their own religion.

After reading this book and watching Minister Farrakhan’s The Time and What Must Be Done webcast series on this subject (www.noi.org/thetime), you will agree that to mock the Nation of Islam is to mock Moses and his pillar of cloud by day that was also a pillar of fire by night.  To mock the Nation of Islam is to mock the prophet Elijah, who escaped death, and was taken up by a whirlwind.  To laugh at and scoff at Elijah Muhammad and Louis Farrakhan is to laugh at and make fun of Ezekiel and his wheel within a wheel.  You would even have to mock Jesus who is portrayed in the Bible as returning to earth in a cloud.  That Prophet Muhammad was transported from Mecca to Jerusalem while sitting a stride a winged beast called Buraq might sound strange but, the world’s 1.8 billion Muslims believe it.  In fact every major figure in the scripture had their own ‘close encounters’ with God and His Angels in a similar fashion; in a vehicle that flies in the sky.  All of this points to the rightness and truth of the teachings of the Most Honorable Elijah Muhammad as explained to us and the world by the Honorable Minister Louis Farrakhan.