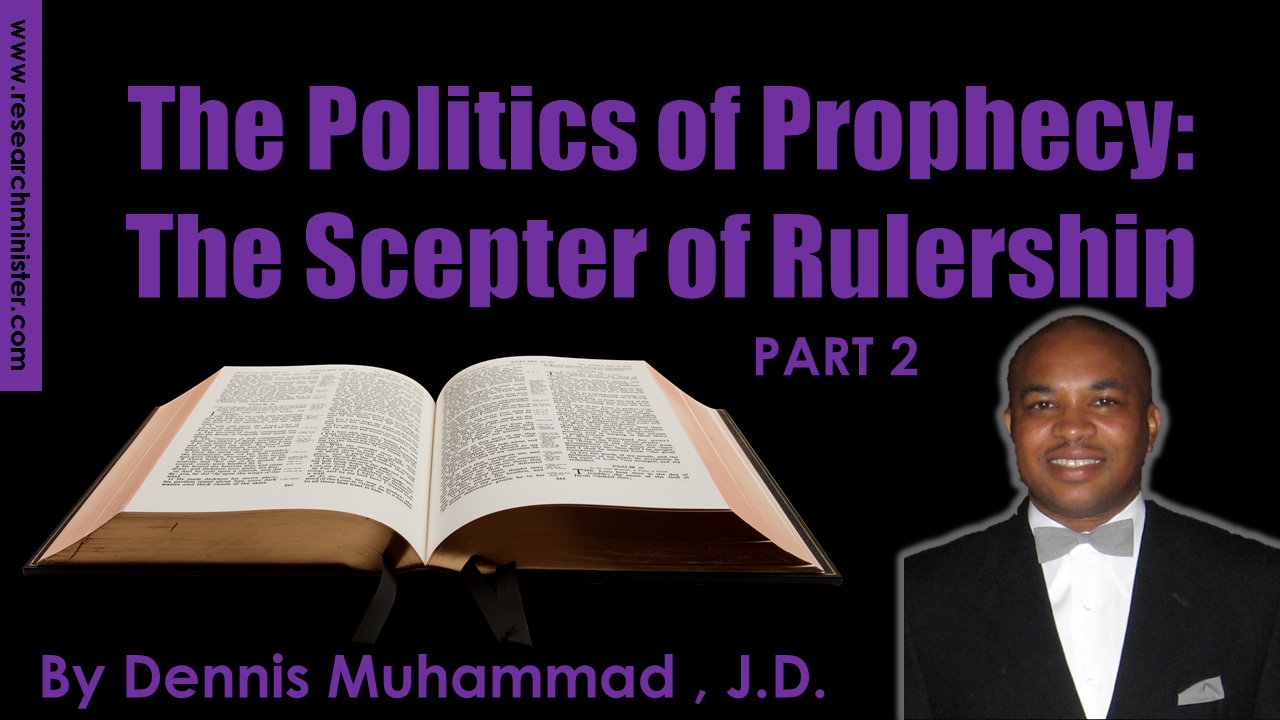 Politics is an over utilized term that many listeners and readers give very little thought to its meaning and implications. Politics implies using policies and rules to influence government. It is the process of maneuvering and making alliances with government and powers for self-interests. Politics is shrewdness in promoting ideas and policies. The ultimate aim of politics is to rule or to influence those who rule. In a religious sense, politics is the jockeying for the identity of the Chosen People of God. Acknowledgement as the Chosen People of God grants political leverage with Torahic and Biblical Believers and readers.

The God of Freedom, Justice and Equality is not only religious, but a political God. He doesn’t mind taking the Kingdom from whom He pleases and giving the Kingdom to whom He pleases. Biblical and Qur’anic politics brings power to the people who are commissioned by God to do a particular work. He creates situations, circumstances and events that cause clashes of power. He empowers the poor and oppressed people of the world against the evil rulers of the world. He empowers His people with righteousness to overcome the enemy’s wickedness. When Allah commanded Iblis, a proud and influential angel, and his cohort of angels to bow down to His man Adam, that was political. When Jehovah sent Moses to Pharaoh with a message to let His people go, that was political. When Jesus started raising the dead in Palestine, that became political. When Jesus started telling people to render to Caesar what belongs to Caesar and to give to God what belongs to God; that’s political.  These political upheavals and many others that are documented in the Bible and Holy Qur’an set the stage for fulfillment at the end of time or Satan’s world.

The Bible story of Jacob and Esau is an example of a Biblical power struggle that has prophetic implications.

“And Isaac entreated the Lord for his wife, because she was barren: and the Lord was entreated to him, and Rebekah his wide conceived. And the children struggled together within her; and she said, If it be so, why am I thus? And she went to inquire of the Lord. And the Lord said unto her, Two nations are in thy womb, and two manner of people shall be separated from thy bowels; and the one people shall be stronger than the other people; and the elder shall serve the younger.”  –Bible, Genesis 25:21-23.

The story begins in Genesis 25 with Rebekkah, the wife of Prophet Isaac who is pregnant with two nations struggling in her womb and two manner of people separated in her bowels.  One nation is stronger than the other. The stronger and older nation will serve the younger. It is interesting that the story refers to nations and peoples in the womb of a woman. Of course, the Honorable Louis Farrakhan teaches that Biblical stories are symbolic with deeper meanings. The name Jacob, Yakub in Arabic, means supplanter. The Teachings of the Honorable Elijah Muhammad identify Yakub as the father of the Caucasian race. Yakub was a geneticist that tampered with genes to graft a new and weaker people out of the nature of the original people. This grafting and genetic process is documented symbolically in Genesis 30 when Jacob separates the white out of speckled and spotted lambs and sheep to make a new breed. Of course, sheep are symbolically people who are easily led and deceived.

According to the Biblical narrative, Jacob was the younger and weaker twin of his brother Esau who was guaranteed the birthright blessing of his father Isaac. The name Esau is equivalent to the Isa, the Arabic name of Jesus, which means first born. Jacob was jealous of Esau’s strength and birthright which granted him the blessing of his offspring to rule. Jacob conspired with his mother Rebecca to steal Esau’s birthright by tricking and aged and blind Isaac to bless Jacob who was disguised as Esau.

It is important to point out that the name Rebekkah is not just the name of a mother giving birth to two nations, but a city or town that will produce two manner of people. The original name of the Holy City Mecca is Bakkah, a name related to the Kabbah, the House of God. The Arabic version of Mecca is Makkah, meaning sanctuary, which derived from the name Bakkah. Makkah is the sanctuary or House of God. Re-bekkah, is the remaking of symbolic womb that would produce two manner of people that are different and will be separated. These two people or nations will struggle for the divine rights as the Chosen People of God. During this struggle, the older nation will serve the younger and the stronger will serve the weaker. The coming of Mahdi, will manifest the politics of this prophetic struggle for power. The Honorable Louis Farrakhan is the catalyst to provoke the politics of this prophetic fulfillment.

Jewish historians and rabbis have been successful in rewriting history and scripture to justify their claim as the Chosen People of God. The Jewish scholars and rabbis have been able to make the title of Chosen People stick until the exposure of their fraudulent claims by the Mahdi and the Messiah during the days of judgment. They understood the scriptures were prophetically referring to the Black people of America, who are the firstborn or original people of God. The name Israel hides the Jews’ true identity as Yakub’s people who have supplanted our prophetic history as the Chosen People of God. Jews have taken advantage of their scriptural positioning as the Chosen People. Many Christian scholars acknowledge and support their divine rites granted to Jews in the scriptures. Consequently, White Christian nations support the State of Israel in their unjust taking of land from the Palestinians. They support Israeli terrorism in the name of God. The ramifications of this exposure will be the loss of their power and control over their elder brothers. The loss of power and influence is the basis of their prophetical conflict with the Honorable Louis Farrakhan, the Nation of Islam and Black People of America.

The Honorable Louis Farrakhan teaches that Allah passes the scepter of rulership through Divine Revelation. Power comes to the people through divine revelation imparted to Allah’s chosen servant. The new knowledge or revelation must be more superior than the knowledge of the people you seek to rule. Allah raises a Messenger to empower His poor and oppressed people. His Messenger coming into a world that is anti-God and anti-Christ erupts a conflict between the Messenger and the ruling powers.

The Jewish people have taken an interest in the American Black people and its leadership because they are aware of the true identity of the Chosen people. Elements of the Jewish community want to maintain a relationship with the Black community to protect their interests and to control our interests. The Honorable Elijah Muhammad revealed the methodology implored by Jewish billionaires called Tricknollegy. Tricknollegy is a system of trick and lies used to deceive and master the original people of the earth.  Billions of dollars are invested in alcohol, drugs, entertainment, athletics and silly exploits to keep our people ignorant. Jewish philanthropists invest HBCU’s, educational religious programming for Blacks to direct and control our thinking in support their interests.

The Honorable Louis Farrakhan and his helpers have exposed their false claims to the Chosen People of God and revealing the secret relationship between Blacks and Jews. The fear of this exposure and the loss of control over Black thought will end the exploitation of Black bodies and the blood sucking of the poor. The Honorable Minister Louis Farrakhan is made for this conflict. He is made to be the winner and will break the power and control of Jewish influence over Black leadership. His is returning the scepter of rulership back to its original owners. We are his helpers in this mission to the end and to a new beginning.