YOUTH DEFEND MINISTER FARRAKHAN: A Demand To Denounce The Adversaries of the Black Community 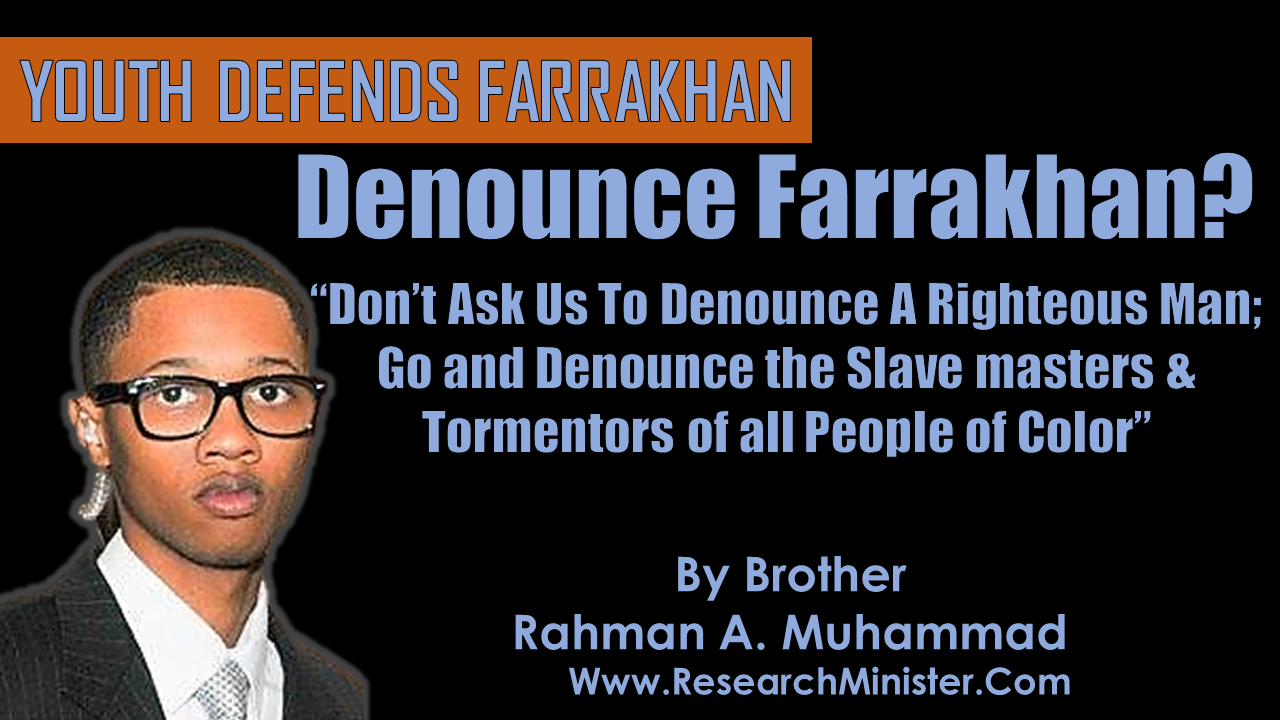 Bro. Rahman A. Muhammad is 20 years old. He is a citizen of the Nation of Islam at Muhammad Mosque No. 55 in Memphis, Tenn. He is a Master Barber and  graphic artist with a passion for producing and engineering music.  He joins the growing chorus of those who reject the demand of the white ruling class that Minister Farrakhan be denounced and repudiated.  ResearchMinister is honored to share his thoughts with our readers.  Read, Reflect, Act & Share

Black America has thrived for its existence among White supremacy for decades. They have been controlled us; how we conduct themselves; how we think, act, live, and the list goes on. …

Why can’t Black America see things from their own point of view? Why are we denied the freedom to express ourselves? Why are we forced to accept a false reality of an integrated paradise in spite of  all that has happened to us, even up to the present time?

Here is a man that has fought for the freedom and dignity of the Black man among powerful adversaries throughout the world. He speaks to the needs of us as a people, without rest and we feel that he is more than worthy of  gratitude and respect. It is true that the Honorable Minister Louis Farrakhan has been made by Allah (God) to be our Black Hero; a champion of the rise and liberation struggle of us as a people.

He has shown us, for 60 plus years, an example of unconditional love.  The love he has for his people is seen in how he is always willing tol sacrifice his own life to see us free from sin and evil and the wicked plans of our enemies. He has aroused hatred coming from  the powers that rule over America, the United Kingdom, and many others, despite the fact that he  hasn’t fired a single shot from a carnal weapon. Yet, it’s his exercise of Free Speech that bothers so many people? Why can’t we love a hero like the Honorable Minister Louis Farrakhan?

Well, it is time now for us to ask for America and the World to reciprocate the same for their heroes. The Honorable Minister Louis Farrakhan and his work around the world is so positive that you can’t equate it to the works of those continue to pressure the Black man and woman to denounce him. America and the world have committed a great atrocity against the Black man in America and people of color throughout the Earth. If you want us as a people to denounce Farrakhan, then you have some denouncing to do as well.

Denounce the prolific perpetrators in Europe that funded and participated in the enslavement of the Black man out of Africa. Denounce those that took the land of America from the Indigenous people, robbed, raped, poisoned, and killed them.

Denounce Christopher Columbus. Denounce the Founding Fathers that built America off the backs of slaves. Denounce George Washington, Thomas Jefferson and all of those U.S. Presidents who owned slaves on their presidential plantations. Denounce the enslavement of the Black man in America.

Denounce White America that continued the mistreatment of people of Black people in America long after chattel slavery ended, many who turned their backs on us while their White brothers beat and killed us in the streets across America. Denounce the F.B.I. for spying on Black leaders, hunting them down and even taking it further to kill some of them as they grew in popularity. Denounce J. Edgar Hoover for his ordering a “manhunt” for the Messiah among Black people. Denounce the Government of America for its involvement with bringing crack and cocaine into Black neighborhoods and using it to trap the Black man to satisfy the prison industry.

Denounce America for her involvement in facilitating the spreading of disease among the masses of the people and for poisoning the food to cull the population. Denounce the media controllers and/or beneficiaries, for their promotion of Black destruction through the media’s use of the  airways to destroy the Black struggle for liberation. Denounce EVERYTHING that made the Black struggle what it has become today-arduous, painful and unending!

America and the world are demanding we denounce what THEY feel is wrong, so we have to demand they denounce everything that WE know is wrong. They have to acknowledge, apologize, and denounce what they have done to us as a people, otherwise, their plea for denouncement of others should not be acknowledged.

In the so-called “Land of the Free,” we maintain our right to exercise our freedom to think and express ourselves without censure.  Calls to denounce Minister Farrakhan proves that the destruction of the Black man has been designed by those who push for the denouncement of our Hero, our Champion, the Honorable Minister Louis Farrakhan!